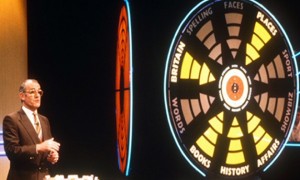 DESPITE LATTERDAY APPROPRIATION BY lazy stand-ups, this is still a sleeping giant as far as fondly-remembered classics go. To wit:

a) Early years depicted The Bull pub sign with Bully incorporated into it. Suddenly static Bully moves, taking a quick glance to the right to check no-one’s looking before jumping out of sign and landing on ground with loud tympanum noise. Bully makes way into The Bull, with ‘Darts Contest’ banner over door, then proceeds straight to oche, throwing one dart and landing bullseye. Cartoon busty barmaid serves pints in background. Customers not fazed by presence of huge bull playing darts.

b) Second and most memorable sequence (used from around 1986-92) showed Bully leaving The Bull apparently after said darts match and hopping into cartoon coach, giving lift to six stereotypical fat darts players who all sat on the back row and gave a genial thumbs-up to the camera. Action turned sinister, however, as coach suddenly inherited flying ability and entered bizarre world of darts iconography, with giant metal-wire darts numbers and dartboards spinning past the windows. Human darts players pointed and looked worried. Rush of the blood to the bovine head caused Bully to press “ejector seat” button on dashboard and launch himself clear of the coach, thankfully grabbing onto the flight of a massive dart and presumably sending the six players and bus plunging to their deaths. Bully ended up flying directly into camera, and screen exploded in shower of dartboard sector dividers.

2) Show gets under way. Early years saw studio adopt standard game show layout of audience out of shot behind camera and BULLSEYE logo hanging on back drape. Aforementioned compere Bowen emerges from underneath another standard device of rising vertical partition, sporting dartboard sector design. Later series saw studio topography reversed with audience in full view along back of studio, and Bowen appearing to rapturous applause from top of flight of steps (the ones Bully pegged it down during his “episode”). Here Bowen would stand mid-flight and deliver some tired opening gambit, usually revolving around a clearly made-up viewer’s letter. Also in later years Bowen would at this point introduce darts-shouter and nominal scorer TONY GREEN, normally involved in hackneyed sketch to much derision from audience, for some reason.

3) Quick burst of theme music then onto the contestants, three teams of two people – one darts player (standing up) and one non-darts player (sitting down). Chat to punters, ask about anecdote. Bowen: “Super, smashing, great.” (though he insists he never said this).

4) At last the first round: CATEGORY BOARD. Non-darts players (or NDPs) take up positions at satisfying circular desks, darts players (or DPs) occupy stools along the back. Bowen moves over to show’s central device, the Giant Rotating Dartboard Structure, first showing aforementioned category board. Clockwise from the top: Faces, Places, Sport, Showbiz, Affairs, History, Books, Words, Britain, Spelling. Other series featured Food, General Knowledge, and Bible (amazingly). Each of the ten sectors was further divided into sections denoting various amounts of cash, ranging from large £30 sectors round the outside to tiny £100 sectors near the middle, and the famous £200 “wildcard” bullseye marking the centre. NDP nominates category, DP aims one dart at chosen topic. “Questions get more difficult” as Bowen warns us – first is worth £30, then £50, then £100. Get the dart in chosen category, and money equivalent to value of sector is banked. If incorrect category hit, get asked a question on that subject “but there’s no bonus”. Category light goes out once question is asked. Category cannot be used twice – “The ones that are lit are the ones you can hit”. Green stands by board and verifies categories. If unlit category is hit, throw is illegal – “No, that’s in Places, and the category’s gone”. Play continues to next team in that instance. Bonus light available for attempting someone else’s question, if they got it wrong. Out of time signalled by cartoon Bully appearing in corner of screen and mooing (little puffs of steam shoot out of his nose). Spelling answer confirmed by cartoon Bully walking along bottom of screen with dictionary, leaving trail of letters behind (word “dictionary” written on back of book, for some reason). Bowen’s questions stored in large rotating dartboard/table thing. Round ends after each team gets three goes. In earlier series at this point, say goodbye to trailing team, and hand out prizes – money acquired, set of Bullseye-branded darts and the famous BENDY BULLY. In later series, they just carried on with all three teams.

5) Second round: IT’S POUNDS FOR POINTS. Rotating Structure turns to reveal regulation-type dartboard. Just get as many points as you can in three darts. Team with best score gets to answer £100-difficulty question, if correct they win DP’s total in quids. Bonus light available again here for chance to win team-mate’s total. Do this three times. Team with most goes through to final (first round scores carried over). DPs hardly ever got 180 – 41 was more common score. Each sub-round accompanied by wonderful musical pieces – standard theme tune, odd “middle-eight” part then variation of theme. After the three goes, say goodbye to losing team or teams. Hand out prizes as above, along with extra Bullseye silver tankard (silver goblet for lady contestants), and the money they won – Bowen either takes wad of cash from jacket pocket and starts to count it out (“Ten, twenty, thirty…see you after the break…forty, fifty…”), or promises that “it’ll take two minutes to count this out, see you after the break.”

6) Classic era (1981-92): Cartoon Bully plays darts and writes ‘End Of Part One’ on darts blackboard. Post-Year Zero (1993-5): Bully takes ride on Giant Rotating Dartboard Structure as it spins really fast again, accompanied by the not-so-catchphrase: “Back in a couple of throws!”.

10) Final round: BULLY’S PRIZE BOARD. Rotating Structure changes again to special nine-prize, 17-sector board. Aim is simple: “Keep out of the black, in the red, nothing in this game for two in a bed”. Red sectors contained prizes, black contained nothing. Cartoon Bully appears from centre of cartoon prize board, and points at each number to reveal prize (except he splays out gloved right hand towards number 4). Bowen & Green accompanied, Green shouting: “IIIIIIIIN ONE!” “IIIIIIIIIN TWO!” etc. as Bully pointed, culminating with “AND BULLY’S SPECIAL PRIZE!” (reward for landing the bullseye). Bowen described risible prizes as they went along, usually in form of rhyming couplet (eg “This’ll keep you clean…it’s a washing machine” or “There’ll be laughter and whoops as you go through hoops with this fantastic croquet set”). Most ridiculous prize ever noted: a “Lazy Suzy” (ask your gran). Nine darts available, three for NDP. Thumbs-up from cartoon Bully and quick burst of theme if bullseye was hit.

11) After, Bowen lists all prizes won then offers chance to gamble those (“Your money’s safe, the money you won earlier, your darts and your tankards are safe, and the £280 going to the hospice, that’s on its way after the show…”) for mystery prize, “what’s hiding behind Bully” (or vertical partition). Limited time to decide – in fact, only “the time it takes the board to revolve” with scary space-type sound similar to ‘Lucky Star’ by Madonna in background. If they want to walk away (“Well Jim, we’ve had a smashing day, and we’re happy with what we’ve got”), wheel on second team and offer them chance to gamble their money (and Bendy Bully, no doubt). If they refuse, bring on third useless team and offer same. Task: get 101 on regulation board with six darts, “three for you, and three for you”, NDP first (Point of order: How did they know that the non-darts player was really a non-darts player? Did they use a lie detector or something?). Tense as you like, with dramatic drum-roll overlaid and Green & Bowen urging players to “take your time, there’s no rush, take as long as you need”. If they win, rush over to ‘Bully’, lift partition and reveal boat/car/caravan on giant dartboard, wheeled in by Bullseye roadies. Play exciting “party mix” of theme with various whistles, whirls and squeaks added. Bowen bundles winners into prize and insists they try it for size. If they lose, play standard theme quietly and reveal prize anyway (“Let’s take a look at what you coulda won”). Sometimes prize was a holiday, necessitating partition to reveal Quantel-swoop of various stills from destination, extensively described by Bowen, with the payoff: “All for the throw of a dart!”.

12) It’s all over. Bowen’s head appears within cartoon dartboard at The Bull, credits roll up darts blackboard as Bowen rounds off at great length – eg “a Vauxhall Nova, beautiful economical little motor car, beautiful little example of one of Bully’s star prizes! We did the rooting, you did the shooting! What a night you’ve had on Bullseye! Watch us next time on Bullseye! Could you do it, at home, with the pressure on? These lads did! See you soon! You can’t beat a bit of Bully! Byeee!”. Cartoon Bully throws three final darts (scoring 17, two missing the board; must’ve sunk one too many), then closes doors on dartboard. Central Production logo painted onto outside of dartboard doors.