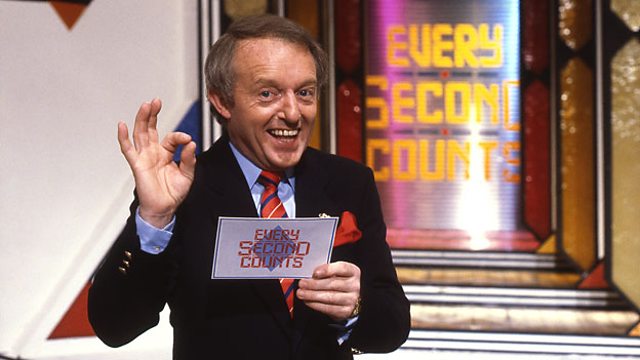 THE SECOND, and undoubtedly the greatest, instalment of PAUL DANIELS’s great Beeb game show trilogy (alongside ODD ONE OUT and WIPEOUT), this was a long runner and no mistake. You knew you were in for a thrilling time when the announcer welcomed you to “EVERY! SECOND! COUNTS!” with the camera zooming into a door on every word, before Paul walked through it and gave a toe-curlingly twee wave. Three heterosexual couples would face true or false questions (“If you think it’s a Beatles song, say ‘fab’!”), talking it in turns to be in the ‘driving seat’ and give the answers – double the points in the second half, so of course the husbands always went second. There was a nice “boo-wip” sound effect if they got it right and a nice “uh-uuur” sound effect if they didn’t. Paul would often dispense silly hats and props in one of the rounds to jolly things along a bit. The winning couple would go through the final to win progressively better prizes, and at this point it was the law that somebody in the room would ask if they actually won all the prizes. In fact they didn’t, what with it being licence payers’ money, with the previous prize being grabbed back when you won the next. It was all a bit low-rent next to the glamorous ITV opposition but ran forever anyway. Everyone’s favourite bit came at the end, though, when there was an extra twiddly bit in the theme tune to allow Paul to do an even more toe-curlingly twee wave.