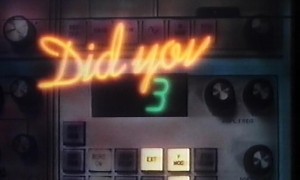 THE GREAT and the good settle down in a beige-toned boudoir set to ruminate upon the small screen highlights of the last seven days. And then once LUDOVIC KENNEDY has shut up, three special guests offer their own four penn’orth of amateur critiquery, usually comprising of a) a posh columnist from Fleet Street b) a stage actor who will confess, by way of an opening apology, “I’m afraid I don’t usually have much time for the box – in fact I haven’t even got one; and c) a parliamentary backbencher with too much time on their hands. Normal tripartite editions would be interspersed with “specials” devoted to one-on-one interviews wherein Ludo invited topical personalities to listen to some of his obsessions and invite them to lunch at one of his numerous London clubs. A worthy, if dull, attempt at TV talking to the nation about itself. Revived, and pretty much reviled, in the early 90s with JEREMY PAXMAN in charge of proceedings, including that dicey opening monologue (“Tough times for people in power this week – yup, BBC mandarins have been trying to explain why Los Barcos has rather turned out to be Costa Packet”).