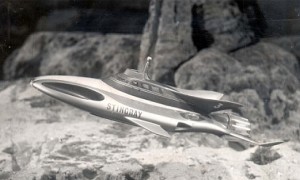 ANYTHING CAN happen in the next half dozen observations. As long, that is, as it involves lengthy shots of that mechanical fish thing leaping up and down above the sea’s surface, enigmatic sideways glances from mute mermoid Aqua Marina, equally lengthy shots of that big floating skyscraper on stilts thing folding itself away at a moment’s notice, Troy Tempest skipping along the sea bed in a giant goldfish bowl, a few over-sized model clams mooching alongside real guppy fish, and some stuffy bon mots swapped betwixt principal characters over cigars just before the end credits. Was that half a dozen?