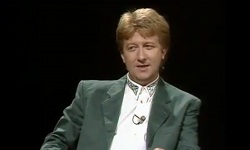 MOSTLY TEDIOUS panel thing hosted by JIMMY MULVILLE, who would invite planted audience questions for four comic panellists to answer via their own stand-up acts or, in the odd isolated case, an actual natural wit. Almost all of the latter was provided by the magnificent TONY HAWKS, the resident performer in every episode who frequently showed up the rest of the panel for what they lacked and single-handedly salvaged whole episodes. Sometimes it was association with Hat-Trick rather than real observational talent that got guests on, with STEPHEN FROST in particular only able to raise a laugh when responding to the sound effects round (“Siamese twins having a wank?”). Proper comedians like FRANK SKINNER, NICK HANCOCK and JIMEOIN helped matters along though the second series was also hindered by the residency of an overly misandric JO BRAND, who seemed to include men, alcohol and cakes (“Don’t heckle me, I’ll sit on your face”) in just about everything she said. There were questions from celebrities in the audience (JILLY GOOLDEN, DAVID GOWER, NEIL KINNOCK, TONY BLACKBURN) which didn’t aid the process greatly (except when JOHN McCRIRICK made a verbal pass at Brand and she responded with real poison), and Mulville himself admitted afterwards the show didn’t work. Opening titles showed a head being cracked upon and a pinkish slime emerging to run down towards a grating in the gutter. Newsnight’s next.