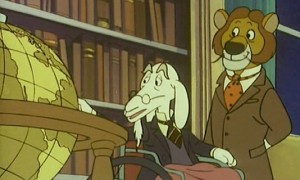 THE TIME: THE mid-80s. The place: a children’s TV production meeting somewhere on the continent. One exec pipes up: “Hey, I’ve got a great idea for a cartoon! Why not take some old classic book, one that’s out of copyright, and just have all the characters played by animals!” Ensuing production lasts 100 episodes or so and involves erstwhile dignified city gent Phileas Fogg become, er, a lion who bets he can travel around the world in less than eighty days enlisting the help of French butler Rigadon, a beaver/bear thing, and Tico, a Spanish mouse who lives in Rigadon’s hat. En route they contrive to rescue an Indian princess who is a grey cat with lipstick but who’s somehow as big as Fogg and who is about to be slaughtered by a religious sect. The pair fall in love and get married, but not before outwitting the machinations of two bumbling police canines, plus a bizarre wolf/dog, The Insidious Transfer, who is supposedly a master of disguise but can’t help his eyes gleaming at inappropriate moments. Opening sequence had entire freakish menagerie marching a la DAD’S ARMY titles over an image of Big Ben while unnamed chorus crooned inaccurate promise of “finding a pot of gold”.