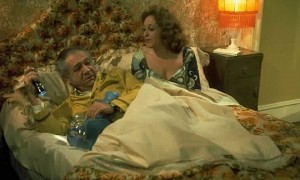 WHAT LIFE WOULD BE LIKE if you had Sid James as your dad, i.e. ace. Episode would begin with Sid, playing character called Sid (naturally), perusing the paper for the racing odds and end with him caught in an unflattering position/sporting a piece of inappropriate clothing/caught in an unflattering position while sporting a piece of inappropriate clothing. Inbetween: wife Jean moans about Sid forgetting to put the potatoes on; son Mike dresses like a hippy; daughter Sally implies she was off to have sex; Sid slurps scotch; Sid claps hand to forehead; Sid leers over passing crumpet; Sid laughs. “No, no, no, no, no, no, no, no, you silly woman!”