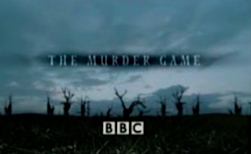 BIG BUDGET LOW KEY play-along-at-home TV whodunnerin, parachuted into Saturday night primetime and promptly chuted further and further back in the schedule as viewers dropped faster than the show’s victims. Contestants were the middle management types who peopled THE KRYPTON FACTOR and who went on to dazzle the likes of CRISIS COMMAND: COULD YOU RUN THE COUNTRY? Their mission: find the person who killed a woman in the make believe village of Blackwater. Suspects will be eliminated each week, but so – USP Alert! – will the detectives. Yup, another show with an “eviction”, here taking the form of a supposedly chill-inducing face-off called The Killer’s Game, which in reality more resembled that bit in THE ADVENTURE GAME where the person always got trapped in a dark cupboard. Our sleuths whiled away each episode “writing reports” in their youth hostel-esque dormitories or doing painfully contrived ploddery, i.e. asking a teary suspect three loaded questions, or searching a bin bag for a carefully-placed crisp packet. Their efforts were then lugubriously appraised by Detective Bob Taylor, a real-life copper and least excitable front man imaginable for a programme about killing. “Good morning” he would sigh at the start of each briefing. “Good luck,” he would sigh at the end of each briefing, “I think you are GOING to need it.” George Dixon had more pep than this, and he was 95 years old. The series went on for ages and, rather than the case becoming clearer, somehow things became more convoluted and confusing. Shifting time slots didn’t help – if you missed one episode you were done for, like the ever-dwindling population of Blackwater. Turned out the builder did it. Or so it says here.