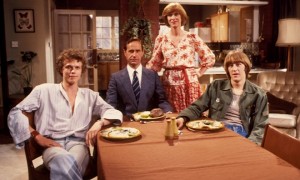 THE PHRASE “BITTERSWEET COMEDY” used to turn up in listings mags and continuity announcements with alarming regularity, usually accompanied by a presidential motorcade of bad vibes. It’s one of those phrases where two words are unceremoniously lumped together, cancelling each other out completely in the process, like coupling “meal” with “deal”, or “special” with “bus service”. Any billings in Radio Times commencing with an excitable “8.30 NEW SERIES” had only to be scanned for the presence of such words as “housewife”, “solicitor”, “separated”, “single”, “Home Counties”, or the dread phrases “making a fresh start” and “coming to terms with”, for the reader’s ears to instinctively tune to the seductive call of DUTY FREE on the other side.

BUTTERFLIES was the exception that proved the chintzy home rule. WENDY CRAIG was the stockbroker belt everywoman Ria, failing to cook, failing to laugh, and failing to drop it all and have an affair with semi-loveable rogue BRUCE MONTAGUE despite regular abortive trysts in the park (chauffeured by the inimitable MICHAEL RIPPER). Failing to care, or indeed notice, were sarky teenage sons NICHOLAS LYNDHURST and ANDREW HALL, and eternally oblivious dentist hubby GEOFFREY PALMER, an amateur lepidopterist (hence the title) operating a permanent system of emotional half-day closing.

High octane wisecracks there were not, and for that reason the show has been ill served by the clip-show junta, reduced to ten seconds of pimply youths in camo jackets sniggering at blackened saucepans. But those round-table rounds of mirthless intergenerational banter were exceedingly well judged: a stream of underpowered snipes uttered at the far wall in lieu of proper conversation, perfectly capturing the communicative no-man’s land of familial last orders. This was something new and perceptive. (By the time MY FAMILY latched on to it, it had long become something old and bollocks.)

No subsequent sitcom introduced as “bittersweet” by the gentle-voiced man with the big blue globe for a head came close, and that goes double for anything else writer CARLA LANE came up with, which all falls neatly into two categories: volume knob-cracking regional stereotypes on benefits, and the stuff that lies at the very bottom of the bittersweet cracker barrel, wherein Felicity Kendall mopes wistfully around Hyde Park at sunset for all eternity.