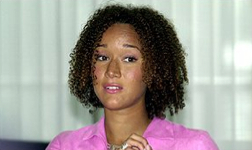 METALLURGY-FRIENDLY DATING MUNDANITY shoved out on a newly-born E4 and fronted by Melanie Hill. Who? Tsk, how quickly you forget: Melanie, her off of the first Big Brother, who almost won but didn’t, and who shared – GASP – one tiny kiss with a fellow heterosexual contestant. Now you remember. Perhaps you wish you didn’t. This was supposedly Mel’s “debut” as a telly presenter, hence setting a precedent for erstwhile BB housemates to try their luck at being a Television Star. It was also her swansong, hence setting a precedent for erstwhile BB housemates to fall spectacularly and rapidly on their arse. Resoundingly untelegenic premise involved a looking-for-love twentysomething spending a week in a converted penthouse chained, literally, to a long line of potential suitors. Participants had to eat, shit and sleep shackled. One by one the suitors would be “evicted” – as per every bloody reality game show during this decade – by the Mr or Mrs Looking-For-Love, after trying to exhibit their amorous designs via a series of challenges, which amounted to the lofty heights of watching each other cook a meal, or going to a garden centre. When each suitor was kicked out, Mel’s big moment arrived as, taking the rejected loser into a debriefing room next door, she would breathily ask each and every sodding one of them: “How do you feel?” Show was stripped over weeknights, so that by Friday the subject had just two hopefuls on the chain, and had to choose between one of them or pissing off with a load of spending money. They invariably, and wisely, chose the latter. This being E4, “alternative” editions saw lesbian and bisexual shacklegangs, and always much implied titillation at the prospect of multi-shagging. None was ever transmitted. We think. Entire series then disappeared, like its mono-phrased presenter, into oblivion, thereby reprising the fate of the [cref 1249 previous programme to feature members of the public chained up for money].