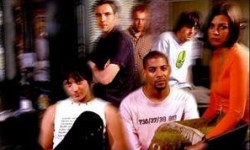 ALL ABOARD THE INTERNET for Tony Garnett’s www-based drama set in the heady world of a start-up company which, bafflingly, seemed to think you could make money just by putting ‘content’ online. In this, the DOTCOMEDY era of “send us your JPEGS” and “Do you know how we can get clearance for the use of the Rhoobarb theme?”*, it followed the fortunes of the keeping-it-real Mike and Luce and their office full of variously sexually orientated n’er do wells. Featured David Walliams, of course, and Andrew Sachs as David Walliams’ dad. Plus ‘cyber sex’ (do people still say that?) twixt Luce and going-native ‘suit’ Will. Second series saw a slight reformat – half-hour episodes – and Mike’s exit. Its lasting legacy is the they-actually-built-it website seethru.co.uk, which is still online now (heh heh, ‘weblog’, they truly were different times) and their link to the old TV Cream.