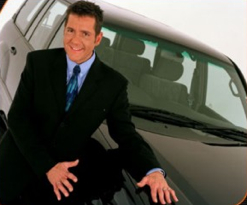 HANDS UP WHO needs to go to the toilet. Haha, you’ve just lost £34,000. Yes, it’s Channel Five’s look-we-can-do-Big-Brother-telly-too motionless car crash of a show, live and direct from the heartbeat of Modern Britain, Lakeside shopping centre, Thurrock, Essex. This was shock and awe on a scale George Bush could only dream of. Twenty ‘hopefuls’ (i.e. those who life has “left behind”) are invited to form a ring around the titular truck (except it’s not, it’s a 4×4) and each place one hand on its surface. The last person to remove their hand wins £34k. Simple as that. But wait, here’s master of parsimonies DALE WINTON, to whoop viewers and onlookers into a paraphilic frenzy. “Is he about to let go of the passenger door? Is he? Is he? Ooh, thank goodness he isn’t!” Dale presumably signed on when hearing the show’s original name, Hands on a Hardbody. Dale presumably stayed signed on when realising the potential for a non-stop gush of single entendres (“This is one bunch of persistent truckers!”). Contestants included the usual box-ticking suspects: a hippy, an old woman, an immigrant, a gay, a disabled etc. All were allowed a 10-minute piss every two hours. Half hour of “highlights” was shown every night, stretching that particular word to new extremes of linguistic interpretation. Because this was the 2000s you could also watch the Whole Bloody Thing streamed on the Channel Five website. Because this was the early 2000s, however, the streaming was a postage stamp-sized picture from a webcam too far away to see the truck, let alone any touching. The thing could’ve gone on forever until everyone died. Perhaps it did. Perhaps they’re all still there. Or perhaps the show was won by the hippy, who promptly announced he was using the prize money to launch a new political party, which flopped in the subsequent 2001 general election. What a trucking joke.