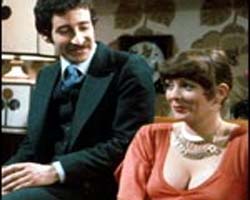 By Mike Leigh. Along with Scum, one of the few Play for Todays to have made a sizeable impact into popular culture. Alison Steadman gets grotesquely down to Donna Summer before hosting the half-hearted suburban drinks do from hell, revealing the proto-Thatcherite anti-social mores of the newly-minted suburban middle classes in the process. With Tim Stern as Beverley’s anti-social husband Laurence (whose weak heart condition eventually gets the better of him in the final confrontation) and meek Janine Duvitski as Ange (with thick husband Tone in tow). Add nervous teacher Sue – escaping from the titular party her daughter is holding next door – and a pentagon of mutual loathing and incomprehension is drawn among the Dralon.

Something of a cult these days (to put it mildly), rep companies up and down the land recreate it in minute detail – rare is the production, it seems, in which the leading actress will dare to move away from Steadman’s original swooping Essex intonation, or the decor away from the original MFI shelving/Tretchikoff painting/ice-and-slice chic. It’s a bit of an odd state of affairs, all told, that what began as a series of improvisations (the way Leigh always works with his actors) has become set in stone, as it were. This can tend to give the whole thing a seventies-in-aspic air that trivialises it if you’re not careful.

OK, the performances tend to grotesque characterisation, but the central thrust – of the dimmer-yet-forceful lower middle classes steamrollering the more reserved, thoughtful types on their way up, and disintegrating their own lives in the process – is more important than the oft-quoted Roussos specifics. Since these references litter the dialogue, and any major update would doubtless fail to match the wit of the original, this remains a problem for the play when seen today.

There’s also the problem that, in mocking the ignorant snobbery of the social arriviste, it panders to the entrenched snobbery of the inherited middle classes. Or, as Kenneth Williams, something of a snob himself but hailing from a working class background, put it: ‘Hampstead sophisticates knowingly laughing at all the bad taste lines. “Oh, a bottle of Beaujolais! How lovely! I’ll just pop it in the fridge…” And they fell about, loving their superiority.’ Any comedy of manners depends on a sense of superiority for the audience to some extent, but the use of snobbery to make a point about class aspirations puts the whole enterprise on ground as dodgy as poor Laurence’s ticker. To add to the confusion, many modern fans of the play (or those with broadsheet columns, at least) treat it as an illustration of how backward society was in the 197os. Ah, if only Play for Today were still about, we’ve got a great idea for an ensemble social satire. Let’s call it The G2-ers…

Related Items:Alison Steadman, Awkward fiddling and fretting at dinner parties, Guardian journalists who've seen about three things from before 1991 but try to turn their ignorance into some sort of purposeful stance, Janine Duvitski, LOL look at the flares!, Middle class types looking stressed, Mike Leigh, Plays celebrated by point-missing dullards who figure their crassness can't possibly be the same crassness fingered by the play itself as they're not wearing garish maxi dresses and blazers, The new snobbery versus the old snobbery, Tim Stern
Share
Tweet
Share
Share
Email