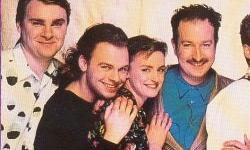 RADIO ONE’s original purveyor of In The Afternoon zoo-style bollocks, initially a blokey miscellany with The Afternoon Boys, Mr Angry from Purley, hilarious gay hairdresser Gervaise and a Phil Cornwell who pretending to be John Cole, Mick Jagger or David Bowie (“Tell us what the time is! “), not to mention the continuing adventures of The Gay Cavalleros, as featured on one of Wright’s forays into the recording studio, which also produced I’m Alright (“‘e’s alright, if you’re alright you can’t go wrong!”), and Yank mini-soap Laura’s First Love. Around 1988, with the arrival of one-man ‘wacky’-penning powerhouse Richard Easter, all the politically incorrect stuff went out of the window (and Wright stopped getting his hair permed) and The Afternoon Boys became the ultra-cretinous Posse – “and we’re back with another talkie bit, talking about our favourite fruit. Richard, what’s your favourite fruit?”). Characters now featured a man who came on and said “Easy life!” a lot, and another called Diamond Geezer, who had a song which went “Mr Spoons! Mr Spoons!” for some reason, the top ten hit-inspiring Arnee And The Terminators, the puzzlingly point-free Down The Pan Daleks (“LEAVE IT!”), atypically timely rave parody DJ Wakner (“hardcore – you know the score – SPAAACIOUS!”), Easy Life, Paranoid Man, and, most cretinous of them all, Roadshow favourite Dr Fish Filleter. Shifted to the Breakfast Show in 1994, but the writing was on the wall and he exited soon after.