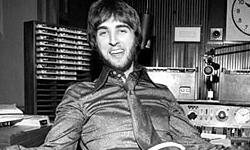 YET ANOTHER easy on the ear, just-the-music presenter. What’s the matter with these people? Just tell us a joke! Despite “He’s the DJ’s DJ” bollocks still inspires a bit of respect, not least for bonkers ‘man’s fight for freedom’ speech on the defiant Radio Caroline when the government tried to shut down all the pirates in 1967, leading to his becoming resident errant free thinker whose unwillingness to do things their way led to repeated run-ins with the BBC hierarchy. Did lunchtimes for a while in the early seventies (including a daily phone-in quiz called Pop the Question), latterly usually found in The Saturday Sequence chair, and also did Radio 5’s post-Baker slot, The AM Alternative. Resolute refusal to move with the times made him a prime candidate for Bannister-shunting, though seen out in style with Chris Morris’ startling on-air attempt to arrange to have him stuffed in commemoration.