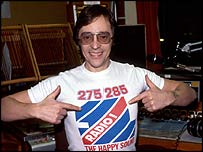 ‘TV ON THE RADIO!’ gag-overusing possessor of an entire Blake’s 7 episode location-friendly Cornish quarry down his gravel throat; when he told you how good the latest Nazareth ‘waxing’ was, you bloody believed it. ‘Rock’ was the key word here, coming on very much like Alan Freeman’s younger brother from the wrong side of the tracks. Later migrated to Virgin, and VH-1 as The Night Fly in those mafioso shades, but – as with dear old Fluff – never above gladly taking the piss out of himself at the drop of a hat. Straight-faced readings of increasingly silly billings for the post-his show The Mary Whitehouse Experience very much fondly remembered too. Toast his name in foaming, nut-brown ale.