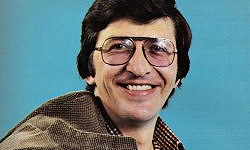 BESPECTACLED HOUSEWIVES’ CHOICE POLTROON who mystifyingly became a ‘national phenomenon’ in the eighties, thanks to Kleenex-baiting, HGV-stopping maudlin request slot Our Tune. That never-changing 11am format in full – syrupy music, Simes’ sympathetic tones… “Godda ledder from a young laydee from Bristol, we’ll call her Carol. Now, last year, Carol went on holiday to Menorca, where she met Brian. They got on well, had a few drinks, a few laughs… before the inevitable happened”. The inevitable would be either Brian and Carol splitting up, Brian and Carol marrying, Brian and Carol marrying and splitting up, Brian dying, Brian ending up in a wheelchair, Carol ending up in a wheelchair, Carol having an abortion, Carol having a baby, the baby ending up in a wheelchair. Or they’re all happily living together (unlikely, though). Whatever the tragedy, it was always 10cc’s I’m Not In Love as Their Tune. Also presided over The Golden Hour (“but what was the year?”), and prone to prattling on about his production team and BBC management as if anyone cared, tedious documentary-fronting, unreasonable pomposity (“Morning World” – “Morning Simon!”), and flights of politicised disgust over ‘issues’ that would usually end up with him harrumphing “nope… bedda pudda record on… nope, it’s no good, I can’t find the words” etc. Disliked by fellow Radio 1 DJs to the extent that John Peel, ‘Kid’ Jensen and Paul Burnett once formed an ad-hoc assault team to ‘get’ him in the car park after the Christmas Party (he never turned up), and one of the first out of the door in 1993. Still flogging the increasingly threadbare Our Tune format, always with that bloody Zeferelli-sourced music, wherever anyone will allow him.