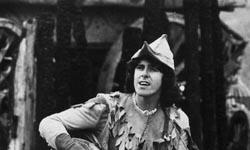 The Cosmic Wheels really were coming off Donovan’s wagon by the early seventies. His run of hits ground to an abrupt halt after an oddly-named collaboration with The Jeff Beck Group, he was more or less fired by producer Mickie Most and subsequently ‘persuaded’ into recording a contract-fulfilling album of songs for children, and finally made his headline acting debut in Jacques Demy’s rather quite sinister retelling of the rather quite sinister to begin with folk tale. Joining a slightly more experienced cast which included Diana Dors, Donald Pleasance (they really weren’t trying very hard to make this a cuddly family-friendly effort, were they?), Jack Wild, Michael Hordern, Roy Kinnear, Sammie Winmill (presumably in a display of that ‘serious acting’ that she quit The Tomorrow People for), Peter Vaughan and seventies bit-part standby Harry Fielder, the There Is A Mountain hitmaker predictably occupied the title role, which handily allowed him to chime in with a couple of his trademark musical numbers. Shot somewhere between Monty Python And The Holy Grail and a Public Information Film (and, lest we forget, an opening caption placing the action in the “Year Of The Black Death”), and festooned with creepy medieval religious iconography, all in all the film is almost unprecedentedly unsuitable for the child audience it was aimed at, and doubtless inspired a few floods of tears during its many ‘fling it out at the tail-end of the school holidays’ outings on ITV. Meanwhile, for Donovan, the game was well and truly up acting-wise, and a humble pie-eating reunion with New Faces’ Mr Nasty was fair near inevitable.