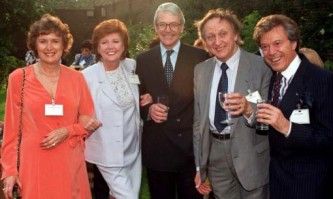 Talk of the Citizen’s Charter serves as a reminder that we are fast approaching a hugely significant anniversary.

What a decade that was. Noel Gallagher rubbing cocaine into Bryan Gould’s hair, John Selwyn-Gummer eating some raw veal in a tunnel under Twyford Down, and Gaby Roslin suing The New Statesman after it claimed she had had an affair with the Incredibly Tall Old Lady off TFI Friday.

It is often never said that if you can’t remember the 1990s then you were there. Thankfully for everyone who wasn’t, TV Cream has compiled this topical quiz to re-engage that part of your brain labelled ‘1990-1999′.

Exposure to these questions will heighten your senses to the correct level so you’ll be in imbued with enough blue tonic to cut some rug and make a slight return to the 90s time and again.

Post your answers below or, failing that, on the back of a Select magazine-branded cereal packet.

1) What did Norman Lamont reputedly sing to himself in the bath on the night of Black Wednesday?

2) Who did John Major famously order to “put up or shut up”?

3) Who staged a fund-raising gig at the Albert Hall for the Natural Law Party during the 1992 General Election?

4) And who was the special surprise guest?

5) What was the name of the prostitute who was discovered renting a flat owned by Norman Lamont?

6) Who was the lady with whom David Mellor had an exaggeratedly torrid affair?

7) What edible sweetmeat did Neil Hamilton brandish at the press outside a junior school before declaring sarcastically, “I shall be entering this in the Register of Members’ Interests”?

8) What did John Major apparently purchase from a Brixton street market during a 1992 Conservative Party Election Broadcast?