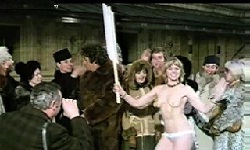 STAGE FARCE-derived punt at a ‘racier’ rival to the Carry On series with ironically appropriate umbrella title. Beginning life as a Ray Cooney-penned board-treader, first essayed in 1967 by Bernard Cribbins and Donald Sinden and still running across the globe to this day, Not Now Darling’s mink-coat-claimed-by-multiple-mistresses quasi-saucy shenanigans were considered perfect fodder for launching a viable alternative to the then-waning exploits of Sid James and company, and was duly made into a big screen version assembling a prospective Not Now rep company composed of those who hadn’t been allowed to ‘play’ Carry On – step forth Leslie Phillips, Julie Ege, Bill Fraser, Jack Hulbert, Cicely Courtneidge, Derren Nesbitt, wrestling refugee Jackie Pallo and Ray Cooney himself, alongside Carry On turncoats (or, more probably, flew-off-in-front-of-clergyman-exposing-camisole-coats) Barbara Windsor and Joan Sims, with notable ‘no thanks’-proffering intended recruits including Terry Scott and – believe it or not – Dudley Moore. More importantly, it boasted pioneering use of a new revolutionary camera effect that supposedly allowed a single set to look like multiple sets, but in reality, erm, didn’t.

Most of the ad-hoc ‘gang’ jumped ship after the first film in the franchise, leaving Cooney and Phillips to be joined by Michele Dotrice, Roy Kinnear, Carol Hawkins, Ian Lavender, June Whitfield, Lewis Fiander and a ‘canon’-taxing big name signing of both Windsor Davies and Don Estelle for Not Now Comrade, further farcical happenings in the name of a stripper (Hawkins, who spends much of the film basically topless, making its subsequent status as pre-daytime BBC1 afternoon favourite both thrilling to excitable youngsters and baffling to everyone else) helping a Russian ballet dancer to defect to the West, with a ludicrous amount of hiding in cupboards along the way. After which the Not Now series failed to, well, carry on. Sorry.