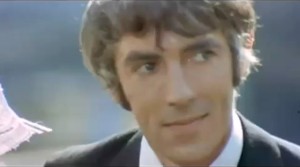 1970, and voters face an unedifying choice between a tired old Labour government and a slightly prannyish Tory challenger in a political climate that’s fast becoming 99{30e2395aaf6397fd02d2c79d91a1fe7cbb73158454674890018aee9c53a0cb96} froth. The time seems right for Peter Cook, John Cleese, Graham Chapman and director Kevin Billington to lift the British political satire out of its comfy old constituencies of class war and union bashing and cock a snook at the emerging cult of the opinion pollster.

Cook, as the titular mercurial time and motion man, enters the ineptly run Fairbairn advertising agency literally from nowhere, and starts shaking up the complacent staff by standing about in the gents with a clipboard. The slug-abed likes of John Cleese and Arthur Lowe don’t take well to their comfy routine of in-office ballroom dancing and test match viewing being interrupted by pesky efficiency, but when the company starts actually showing some signs of success (through a pornographic TV campaign for Olde English humbugs) Rimmer leapfrogs them with ease and sets about establishing opinion poll dominance for the firm by nobbling Denholm Elliott’s rival firm as they survey the religious propensities of the folk of Nuneaton. (Result: 42{30e2395aaf6397fd02d2c79d91a1fe7cbb73158454674890018aee9c53a0cb96} Buddhist.)

From then it’s a small matter to nobble politics itself, manipulating both Labour and Conservatives from the sidelines, joining the latter himself and rising through the ranks to high office. There, Rimmer unveils his masterstroke: the introduction of hourly compulsory electronic voting for the populace on every single policy issue, after which he just sits back and waits for the people, sick of their lives being interrupted by the flashing red light on the front room voting terminal, to beg him to form a dictatorship and make all the pesky democracy stop.

As a Well Made Film it stinks – sketch follows sketch with little regard for shape, characters are paper-thin and drop out of the action as soon as their satirical point’s been made – but for sheer prescience (not least predicting the surprise 1970 Tory election victory – sadly the distributors got cold feet and held off releasing it until after the poll) it’s in a class of its own. Bits of business come thick and fast, and some are great: the slapstick sabotaging of a live Party Political broadcast, some overexcited ‘big desk’ election night coverage, and a high tech defence system straight out of Thunderbirds. As you’d expect, an endless succession of acting stalwarts parade before the camera, many of them great fun. Arthur Lowe’s bumbling advertising placeman and Denholm Elliott’s unscrupulous Peter Niss are excellent, as are Ronald Fraser, channeling Ted Heath via Harold MacMillan as the easily-led over-emotional ‘compassionate’ conservative leader and George A Cooper as the Wilsonian pipe-smoking, fireside-chatting, smugly insincere Labour chief.

Elsewhere, topical cameos about: Graham Crowden’s agnostic bishop is a take on the infamously doubting Bishop of Woolwich; Jerry Ram’s bent far-left activist Ranjit X takes the piss out of Tariq Ali; Ronald Culver’s fuming racist (“Are we mad??”) is Enoch Powell to a tee, and Harold Pinter’s supercilious chat show host Steven Hench could be taken for a David Frost parody, if Rimmer himself wasn’t so clearly an embodiment of Frostie’s rise-without-trace, from Cook’s blank-eyed offensive charm, through a decidedly Frostesque VIP breakfast party at London Zoo, right up to an uncannily accurate recreation of his modish front room (brave stuff, considering Frost’s Paradine Films initiated the project in the first place).

It’s very much one of those bitty, slightly flaky 1970s British comedy films, to be sure, but unlike, say, Rentadick, there are some sharp ideas and great lines among the shapeless mass of random incidents and cameoing comedians. And it’s the only film where Cook’s much debated acting ability is matched to his role: he glides through the film as if on castors, while everyone around him knocks themselves out. Just like Rimmer himself, he bakes his own cake and eats it, backed by a brilliantly swinging theme tune from John ‘Psychomania‘ Cameron. Super!