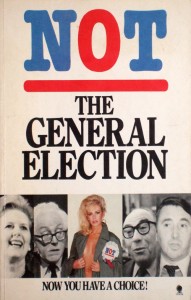 The last knockings of the Not the Nine O’Clock News literary franchise and, by its creators’ own admission, the least. Whereas the calendars of previous years were packed with gags from a platoon of writers, here John Lloyd and Sean Hardie did most of the work themselves, finding out along the way that the 1983 campaign wasn’t quite the non-stop laugh riot it might have been. Add to that increasing disenchantment from the TV series mainstays (you’ll search in vain for any evidence of Rowan, Mel or Griff) and it looks like an ignominious end to a mighty comedy book empire.

Well, maybe a bit, but there’s still a selection of good stuff in this slim volume: comedy graphs; comedy pie charts; Denis Thatcher in abundance; “How the Cartoonists See It” (containing parodies of Tim Hunkin and Mordillo, yet!); plenty of photos of Roy Jenkins looking like Arthur Askey, or Martin Webster looking like the scum of the Earth; a parliamentary version of The Meaning of Liff (“Boyson (v.): to verbally obstruct the passage of one smaller than oneself”); the inevitable election day Radio Times listings (“11.45 Moomins in Voterland”); a list of MPs privileges (“the right to decline to taste anything offered to them in the street by Esther Rantzen”); an election coverage I-Spy checklist (“An ITV reporter interviewing a politician on BBC TV: 5 points, Robin Day eating: 2 points”); an impassioned plea for Weekending to stop doing jokes about Shirley Williams’s hair; plenty of all-round SDP-baiting and that picture of Cyril Smith rubbing his eye. All this and Lord Hailsham too! A valuable historical record.

Related Items:A computer called DORIS, A lot of young ladies in t-shirts and jogging suits running around with bits of paper, Brian Redhead and John Timpson discuss how little there is to say until the results come in with Edward Du Cann, Guess James Molyneaux's mental age and you could be on your way to realising the nightmare of a lifetime!, Harold Wilson resigning to make way for an older man, In-jokes about Douglas Adams, Listeners on Long Wave get something that sounds like a fat frog being pulled through the neck of a thin bottle, Richard Stilgoe with a song about the weather, Schoolfriends of Ludovic Kennedy, Simon Bates says something about Steve Wright's trousers which unfortunately none of us can see, The new-look 'Punch', The Second Coming of Christ will occur on The Paul Squire Show at 8.42pm on the 15th November 1984 just behind the potted plant, Tony Benn drinking tea with the workers
Share
Tweet
Share
Share
Email