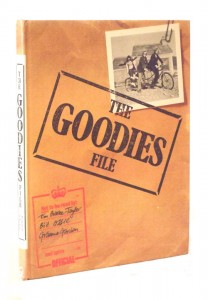 Altogether now: “Kids’ book!” Well, in many cases yes, but what a kids’ book! The first comedy TV tie-in to fully capitalise on the ‘warped Eagle annual’ format that Monty Python’s Big Red Book inaugurated, The Goodies File settled into its new habitat with alarming gusto. Compiled by all three Goodies  (unlike the series, which was mainly a Bill and Graeme production), the brown-covered File followed the ‘random scrapbook’ format of the Python templates (with invaluable visual input from designer Anthony Cohen) and gave it an admittedly slight sitcom-like overall ‘plot’ – in this case the determination of Edna Tole (Mrs), the lady who ‘does’ for our intrepid trio, to fit them up for the tabloids as a bunch of ne’er-do-well ‘coots’, and cop a fat cheque from publishers Weiden, Feld and Nicolson (‘a song, a smile, and amazing stunts with a grapefruit!’) in the process.

The stage is set for an assortment of as-it-occurs-to-them daftness: a lurid home-printed promotional booklet for the ‘anytime, anyplace, anywhere’ outfit; a ‘dress your own Goodies’ cut-out doll tableau (complete with ‘Tim’s sensible shoes’, ‘Bill’s tasteful trousers’ and ‘Graeme’s impressive shirt’); the story of the smash-hit musical Super-Pope; a good hundredweight of OBE references, and Bill’s bird-watcher’s guide with over-defensive foreword (”There’s nothing weird about me, you know […] STOP GETTING AT ME. OR I shall CRY.’)

It’s the early years of the Superchaps’ telly incarnation clapped effortlessly between hardcovers, and with its copious photostatted royal invitations ans secret plans (some scrawled on the backs of actual fag packets – ’20 Gut-rotters coke-tipped’), criminal records and notes from one Izzy Bent, it set the template for even greater, more intricate literary excursions that were to follow. At the time, it was the most Goodies-related fun you could have at the time without access to a VCR, a trandem, and the lease on a 6-legged pantomime dromedary costume. Will you please get off my desk?