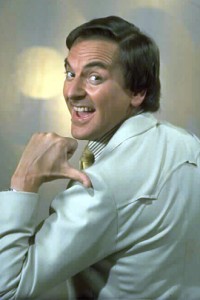 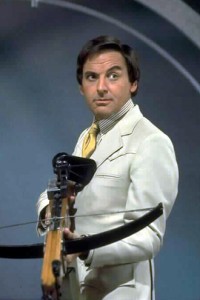 “PICK A POMME, DO”. By some stretch ATV’s greatest ever game show, during its glory years the crossbow-firing-on-a-glam-rock-set Sunday staple was also blessed with the best ever game show host, Lord BOB MONKHOUSE himself. But it wasn’t always that way…twice. Originally crumpling under the tutelage of Canadian stiff JACKIE “Right, right, right – stop. Up, up, up – stop. Left – stop! Right a little – stop! Left a little – stop! Up, up, up – fire!” RAE – whom Lew Grade had spotted *playing* a game show host in a Charlie Drake half-hour, Bob was bussed in after a show-stopping guest spot in which he turned one of the Shot video booths into a shower cabinet. Now that’s entertainment. Then cameth the glory years, a move to Birmingham, with all the municipal pomp the Midlands could throw at it. Bernie the Bolt. Anne Aston (“And this is…I’m sorry I’ve forgotten”). Specially themed dioramas, including one featuring cartoons of skinheads drawn by Bob himself. And lots of things going wrong. 16 million tuned in of a teatime, but it couldn’t last. Bob was accused of taking a bribe from a Wilkinson Swords ad exec (“Before we left the table Bob Brooksby handed me a brown envelope…”) and duly dismissed. In came NORMAN “Listen Dennis, what shall we talk about?” VAUGHAN. He was no good, and quickly replaced by CHARLIE “Don’t tell Williams he’s only t’gaffer” WILLIAMS who was even worse. Punting him off to a summer season at Charnock Richard, the show’s execs saw sense and brought Bob back for a final run. The wily entertainer readily agreed – providing ATV would throw him CELEBRITY SQUARES at the same time. A “golden day” for everyone, really.