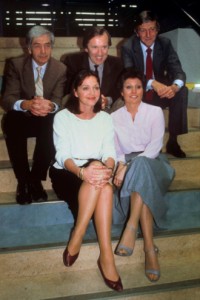 It’s worth recalling just how preposterous was TV-am’s pitch for breakfast television.

Five of the biggest names of the small screen (well, four) giving up their respective primetime gigs for stints at ungodly hours of the day when 99% of the population was in the kitchen, in the car or incommunicado? What kind of madness was this?

But just imagine, for a while, what that pre-launch anticipation was like.

The glitter and glamour of the countdown to TV-am’s first show. The razzamatazz. The smell of money. The titanic self-confidence. And five of the most famous names on British television (well, four).

By way of an instructive if predictable illustration, what would be the equivalent today?

For Angela Rippon read Fiona Bruce: coquette of the nation, a firm hand on her headlines and a penchant for frugging. For Anna Ford read Kirsty Young: aloof, coldly intelligent, affable but prone to the odd deadly spasm.

The equivalent of Robert Kee has to be a journalist with manufactured charm, a face first pickled in an era roughly 20 years ago and the most unsuitable person imaginable to helm a programme that will air between 6 and 7am every weekday. Nick Robinson, then.

Next up, the biggest chat show host of the moment. A man with pretensions above his station, who speaks his mind and thinks his view of the world is unshakable. Not, sadly, Clive James (though if he were hosting breakfast telly we’d watch every single day forever). It is Jonathan Ross. Just imagine the saucy talk that would go on between him and Kirsty. Fragrante delicto over your Danish. A quick ogle over the orange juice. Euuucch.

Finally, to complete the set, a father figure with a tendency to pop up at national events who is at ease jawing with captains of industry, self-serving politicos and the sort of contestants who turn up on Strictly Come Dancing. There’s nobody of comparable qualification to Huw Edwards. Remember it has to be someone who can appear in their comfort zone anywhere other than a sofa at the crack of dawn.

So there you have it: Huw, Jonathan, Nick, Fiona and Kirsty, the new faces of breakfast television. Five appointments that would never ever happen today, seeing as how the slot has slid from being the most valued to the most valueless on telly.

Still, at least we’ll forever be spared the sight of said line-up dying on its arse within a matter of months and being replaced with Adrian Chiles doing the bingo and Tess Daly pointing at tabloid photographs of Kate Middleton.