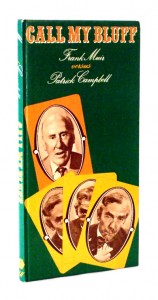 Come with us if you will to a time when the comedy panel game was a shy and gentle beast. Long before it became the default shop window into which comedy agents slung their latest lugubrious signings, the rambling, three-a-side desk-bound banterthon was a quieter, more erudite and – if we may – gentlemanly affair. Imperial phase Call My Bluff was undoubtedly the acme of the genre.

The irony is, while the next generation of panel shows tried to appear more anarchic, they were by comparison impeccably professional, full of pre-scripted bits of business and cues for the guests’ well-worn material, all played with a gimlet eye on future career prospects. The Bluff, by contrast, was a room full of miscreant schoolkids sniggering behind the back of question-master Robert Robinson, throwing tantrums, going off on endless rambling anecdotes, falling out with and generally winding up each other. No-one, as a rule, seemed especially bothered about how they came over to the public.

The book of the programme wisely concentrates on getting this essential atmosphere into print, leaving all that farting about with dictionary definitions to look after itself. The premise: you, the reader, take the place of Messrs Ogilvy, Rushton, Lumley and Drinkwater, as the proxy ‘team’ (“Steady, team!”) for both Frank Muir and Patrick Campbell. Each launches a series of definitions at the other, who worries them into the ground, leaving you to pick the winner. Interactivity!

All that, though, is beside the point. The real joy lies in witnessing two crotchety old buffers rub each other up the wrong way and generally arse about on paper. Muir digresses in quizzically boyish fashion. Campbell takes against said boyish quizzicality in no uncertain terms. Campbell uses a bit of florid language, which Muir instantly mocks. Both affect to be affronted at the crassness of the “obviously” false definitions. Strops come and go, and the game eventually makes its excuses and leaves them to it.

In a masterstroke, each captain’s increasingly irrelevant musings are reproduced longhand, complete with Muir’s little cartoons of hairy legs and bishops falling over, making the whole thing look like a sheet of foolscap that’s been passed to and fro at the back of a Friday afternoon double history lesson. Which is of course exactly how it should be. Not only is this book amateurish in the best sense, it’s also amateurish in the worst sense, but somehow manages to turn that amateurishness into a definite plus. Now that’s the work of true professionals.