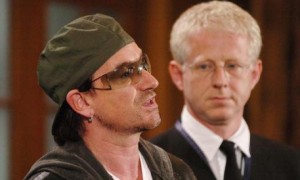 More details have emerged about the script Richard Curtis is writing for the next series of Dr Who.

At a press conference earlier today, Curtis unveiled the identity of the star who will be making a guest appearance in the episode.

Confounding those who were predicting a cameo from the likes of Martine McCutcheon, Bill Nighy, Simon Callow, Bill Nighy or Bill Nighy, the lead singer of 1980s rock band U2 is to feature in the story. He will be playing himself.

Bono, 62, said: “The Doctor is a wily bastard, and I’ve been wanting to screw him over for many years. When he arrives at a U2 concert, I get Edge [sic] to terrorise him with one of his endlessly echoing guitar riffs, then trap him inside a giant lemon.”

Laughing, Curtis corrected his friend by telling journalists the musician would be “turning up for only a couple of minutes” to deliver “a message about third world debt”. The episode will end with an on-screen caption inviting viewers to “make poverty history” and a voiceover from Emma Freud giving details of a number to call to pledge donations.

Curtis was reticent about other details concerning his script.

But he was tight-lipped about the location and the identity of the “monster” with which the Doctor and his companion will do battle.

“To do that would be more than my job’s worth,” Curtis chuckled, before dematerialising up his own arse.

Related Items:how long until Doctor Who starts again?, Ladies and gentlemen and cheapo bits of back projection floating in space, Middle class types looking stressed, Stiff upper lips not being tested in adversity and running away instead
Share
Tweet
Share
Share
Email