Here’s an image that ought to be added to that photo library collection marked ‘GENERIC 1980s’: people “rushing” to submit their applications for shares in a soon-to-be privatised utility: 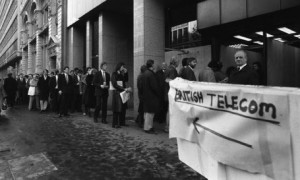 In this case, folks are “rushing” to Fleetway House in London, desperate to hand in their forms before the deadline on 28th November 1984.

It’s a fine evocation of that decade’s mania for privatisation: on the one hand, the allure of this wonderful, get-rich-quick scheme, on the other, the grubby reality of queuing on a wet street by a tatty hand-drawn sign.

The TV news used to love this kind of thing: endless shots of ordinary citizens hurrying, sometimes running, to some anonymous functional building in the capital, like they’d only just realised the deadline had come and they must, MUST, get that share application submitted if it kills them.

It was a craze that provided easy copy for journos and an easy sell for the ad agencies. Look! This thing you already own, but don’t! Now you can actually own a bit of it! For real!

And so it went on, culminating in one of the top crossover adverts of the decade.

Playgrounds across the land, or at least in one East Midlands town, rocked to the sound of kids lamely accosting each other and asking if they’d seen Sid.

If memory serves, this whole business ended with the titular elusive gentleman being tracked to the top of a mountain, only for the hunter (and us) to be greeted with a note that read something like “Gone to buy British Gas shares”. But not before Eddie Grundy and an old woman from the 1960s had got in on the chase.

And yet despite all the publicity, there were still – handily enough for the cameras – some people who “rushed” to submit their applications hours before the deadline, in this case at a branch of NatWest in the City of London: 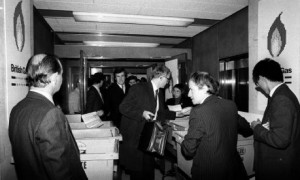 Gone are the hand-drawn signs, but the queue of people is the same: what Greg Dyke would call “hideously white”.

The ones that came later didn’t have the same draw either. It’s hard to remember scenes of people “rushing” to submit applications for a piece of British Rail in the mid-90s. Anyway, according to signage in most of London’s mainline stations, BR still exists. Here’s the inspiration for 20 years of jokes on Week Ending: 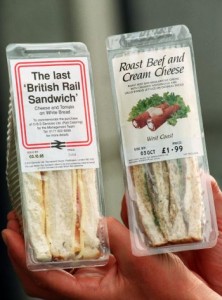 Meanwhile, way back in 1983, the chairman of the Central Electricity Generating Board launched a competition to find the best use for Battersea Power Station. Over 25 years later, he’s still waiting for a winner. 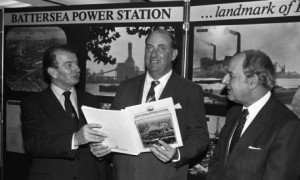