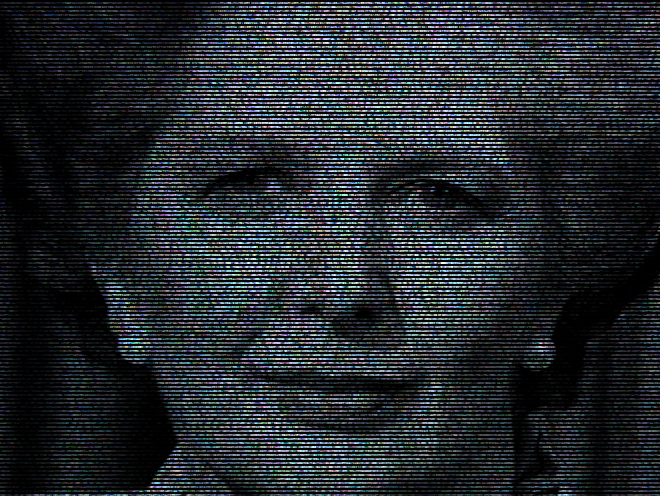 Her favourite programmes were Miss Marple, anything with Paul Daniels, and the Fairy Liquid adverts. Oh, and this. But that was about it. By all accounts television did not loom large in the world of Margaret Hilda Thatcher. But she loomed large in television. She inspired, diluted, bisected, mystified, enraged, enraptured and cocooned it.

An awful lot of television tried to bait or decry her, utterly misunderstanding that such responses only made her stronger. Wiser heads reduced her to the equivalence of a coat hanger. Other shows absorbed and reflected wisps of Mrs Thatcher: her personality, her obsessions, even her attitude. It’s those shows we’re concerned with here: the ones that summed up Mrs Thatcher without necessarily being about her, or even mentioning her. She probably didn’t know any of the following TV programmes existed (including the one in which she appeared). But she wouldn’t have had it any other way.

You could tell something was a bit up with the world whenever Johnny Ball lowered his voice. Serious stuff was about to happen. He was going to tell us about real life. And in Think It… Do It, he was going to tell us about JOBS. Because there weren’t that many in the 1980s any more, or so Professor Phil Redmond wanted you to think, and so it was up to us, together with the good folk at Manpower Services with their Youth Training Schemes, to get off our arses. Had we thought about the financial sector? What about information technology? Look at this film about a day in the life of an apprentice in a processing laboratory. Come on, Mrs Thatcher once did experiments with ice cream, y’know! 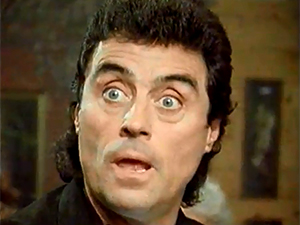 Anyone could make it in the 80s. You just needed the right sartorial signature (jacket and jeans for him, tarpaulin-sized blouson for her), a shady past, a way with words, contacts including a dandied loon and hapless klutz, and a nemesis in the shape of Those Ghastly Men On The Town Planning Council.

There was always money to be found in the land of Lovejoy, where toffs and tearaways rubbed shoulders in the pursuit of wealth, and interest rates were as flat as the Norfolk Broads. This was a world where the sun never set before somewhere a little old lady had been persuaded to divest of a bit of her portfolio. “Well Maggie, it seems you were right all along!”

Thanks to Nationwide, shoppers became “consumers” just in time for the biggest stock-keeper of them all to trip into Downing Street. But now that we were consumers, we also had Rights. And we had to know them, in order to work our the best deals for ourselves, rather than merely relying on a bit of cardboard announcing “2p off” a pack of United chocolate bars. Watchdog took care of the big stuff with its big exposes and big novelty cheques. 4 What It’s Worth did everything else: dodgy second-hand car dealers, the best buys of blended whiskies, and how to fill in a form to buy British Gas shares. All the bits of Thatcherism that got under your fingernails, basically. 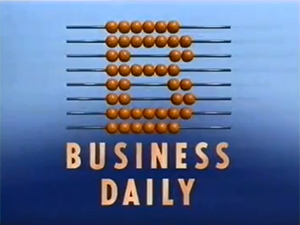 Launched with a big bang just one month before the big crash, here the fag-end of the Thatcher decade was tallied, bartered and flogged. Achingly public service from Channel 4, in that it didn’t really serve anybody, especially the public, it glowered at you at lunchtimes and, from 1989, breakfast times too. “From head to foot-se.” HAHAHAHA!

Still, many of us unwittingly absorbed, osmosis-like, a fleeting awareness of such things as PEPs and TESSAs from this and its later tea-and-toast rival, BBC Business Breakfast. Remit-fulfilling roughage at its rawest.

A gigantic, cross-Corporation, “well, if you MUST” exercise that marked the culmination of the Beeb’s decade-long do-si-do with No 10. Once a year Sue Lawley let us peek inside Auntie’s innards and have a good poke about, being sure to remind us that the sofa from the 1988 Olympics was now being used on Jim’ll Fix It, while Esther Rantzen’s frocks were the same ones she’d been sashaying in since 1972. It was oh so important to know the cost of everything, you see. Is 16p a day really too much to ask? 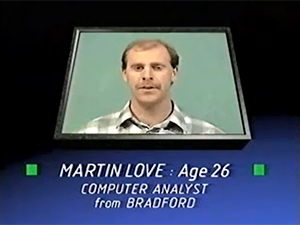 Your indispensable introduction to that most pre-eminent of 1980s breeds: middle management. For most of us, this was the first time we’d heard of, let alone seen, people who called themselves a “sales specialist” or “property consultant”.

And the fact this was happening while they competed against each other in the most dazzlingly competitive competitions in which it was possible to compete, popped the Krypton Factor into a Thatcher-esque hole (“a multi-dimensional hole made from perspex building blocks,” whispers Gordon Burns) from which it’s never really emerged. 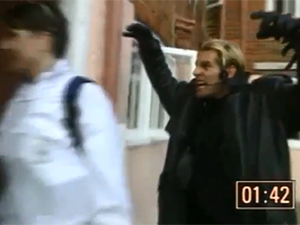 More middle management types, this time strutting around England (never the UK) in primary coloured-jumpsuits trying to stop an evil meddler from getting his hands on their cash.

Everyone could see what all this really meant. Yes: Annabel Croft was poor substitute for Anneka Rice while the bloke in the giant coat who screamed like a hawk was a knob. But oh, didn’t those aerial shots look lovely? The countryside was so much NICER then.

Before Thatcher, kids spent their free time befriending urchins who lived on shitheaps, pretending they were still fighting the war, or living on a double-decker bus. After a decade of Thatcher, kids wanted to spend their free time WORKING. Preferably for MONEY. The fact they seemed to have such a wise-cracking, sensitively-lit, heart-fluttering time doing it just made it all the more impossibly attractive. Here was our very own junior Margaret and Willie. 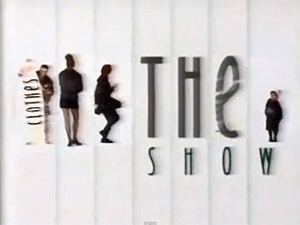 Take one of the nation’s most famous female faces: trend-setter, tabloid darling, opinion former and style icon. Then ignore her and hire Selina Scott instead.

Still, at least Sarah Greene outran both Selina and Maggie. Plus she did that Clothes Show knock-off for a bit, Posh Frocks and New Trousers, which would probably count as even MORE of a Thatcher-era-defining effort were it not itself a knock-off of Frocks on The Box (look: the very first shot is champagne corks popping!). Plus the theme tune isn’t a patch on In The Night. But then what is?

For positively the finest snapshot of absolutely everything to do with the Thatcher era, clear a three-hour-and-15-minute gap in your Saturday morning and watch an entire edition of this: a shambling, shimmering, shouty shop window of a show, thrown open for business once a week by the Captain Peacock of mid-80s morning entertainment, Mike Read. 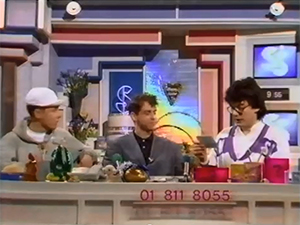 Gone was the shabby, oh-so-70s, make-do-and-mend, dowdy idea of “swapping” one thing for another. This was a Store, not a Shop. Moreover, a SUPERstore. And Mike was your “store manager”, one part Norman St John Stevas, one part Ken Masters.

This was an over-lit, over-stuffed and overdone stew of a programme, but you lapped it up, because everyone important was on it, and it looked like they were having the best of times. Yes, even Maggie herself, and there was no finer stamp of approval than that.

In a Completely Unconnected and Coincidental Fact, Mrs Thatcher’s most pervasive, not-for-turning era spanned precisely the same years as Saturday Superstore. Presumably she sent Mike a Gyngell-style letter of commiseration when he got dumped for Going Live.

Related Items:'Thatcher', I don't remember TV Cream being this political, More political allegories than you can shake a giant chess piece-sized stick at, Oh no - satire!, Thatcher's Britain, The 'Counterculture' taking a break from skinning up to declaim 'women - know your limits!', The dark arts of politics, the eighties (1980-89), The whole 1980s thing in excelsis
Share
Tweet
Share
Share
Email