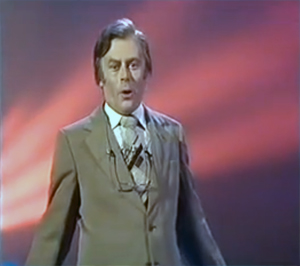 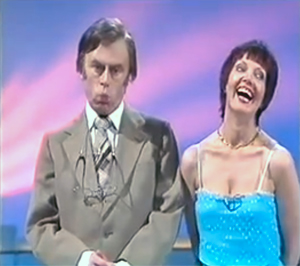 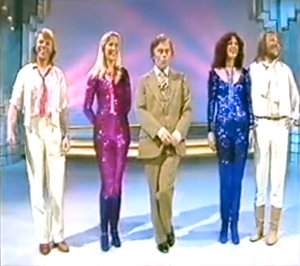 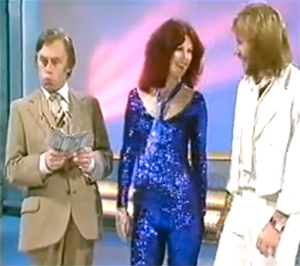 Christmas 1978 was always destined to be a difficult one for the Beeb. First, Eric and Ernie had defected to Teddington Lock, then Brucie hoofed it over to the South Bank. And then a strike forced the Corporation off the air for three days in the week before Christmas, prompting the BBC mafia to draw up contingency schedules for the big day itself (“And now, in place of The Queen, here’s Barney Bear!”). Fortunately, the BBC still had one weapon in its light ent artillery, in the form of the many voices and faces (alright, three voices and one face) of Mike Yarwood. Mike had pulled off a coup in luring the biggest band on the planet (les freres Gibb notwithstanding) to grace his Christmas night spectacular. In 1978, ABBA were at the summit of their imperial phase, beloved of everyone from Elvis Costello to your gran. The tableau for their appearance was a Generation Game sketch and, once again, this was an immaculate piece of timing. For the last three months, Larry Grayson had annexed the Saturday night ratings with his singular blend of gossipy asides, “surprise” guests, endless references to “Everard” and peeps inside Larry’s Room (“It’s Mucky Maisie!”), crushing Brucie’s Big Night banquet of Telly Tennis and The Glums into the ground. One thing we’ve always wondered about this sketch is how it must have been pitched to ABBA themselves – “So you’ll be on this show called Larry Grayson’s Generation Game, but not with Larry, it’s with someone called Mike Yarwood as Larry. And Agnetha, you say, ‘Look at the muck in here!’ Everyone will love it.” In truth, Mike’s “take off” of Lal isn’t much cop (and Janet Brown is no Isla) and the jokes are rubbish (“So which one is the Dancing Queen?”), although we’re pretty sure Benny’s laughter at the inevitable Crossroads gag is genuine. Evidently he’d become acquainted with the Midlands motel mitherer during regular promotional trips to Britain. But that’s not really the point – all we wanted to see was ABBA messing about on Christmas night and doing Lal’s catchphrases. And yes, it would have been even better if they’d been doing it with Larry himself, but you don’t get everything you want for Christmas.