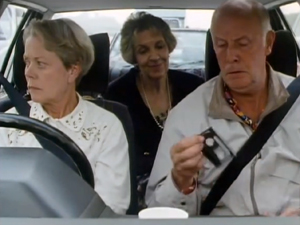 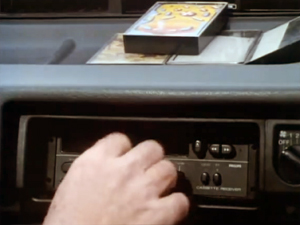 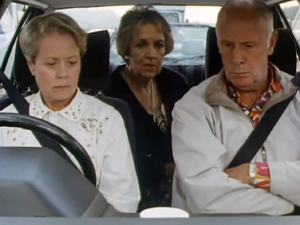 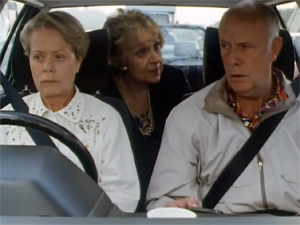 Ooh look, Victor’s radio is tuned into Radio 1 on 1089 medium wave. Probably not Victor’s choice of station, that. Anyway, as we’ve seen elsewhere in this chart, One Foot In The Grave is one of our greatest ever sitcoms and much of that was thanks to the sheer audacity of David Renwick and his wonderfully inventive scripts, not least what became a tradition of an episode each series taking place in real time. During series three, where the show was at the height of its brilliance and pulling in millions and millions of viewers each week, that entailed Victor, Margaret and – as we finally discover – Mrs Warboys getting trapped in a traffic jam. There are loads of fantastic bits of comedic business in the episode, including the conversation between neighbouring cars (“Why don’t you just dangle your private parts out of the window while you’re at it?!”), the phone call and, of course, Mrs Warboy’s surprise appearance. But the bit everyone remembers, and rightly so, is the moment where Victor sticks on a cassette only to find the irate mechanics at his local garage has decided to record something over it. Performed by Eric Idle and John Du Prez, whose other contribution to the series was the theme tune, their bastardisation of Bread of Heaven is absolutely fantastic. Just hearing them harmonise to “he can stick it up his bum” is hilarious. What sets it apart from the straightforward comic song is the expressions by Victor, Mrs Warboys and especially Margaret, which if they couldn’t hear the tape is a masterclass in reacting to nothing and if they could is a masterclass in suppressing laughter. We also really like how it immediately cuts off in favour of some brilliantly out-of-place jaunty ragtime jazz.