The greatest prize ever given away on TV, 23rd April 1994 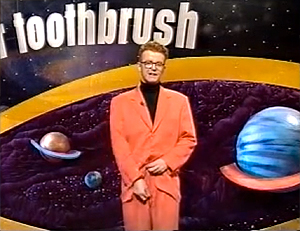 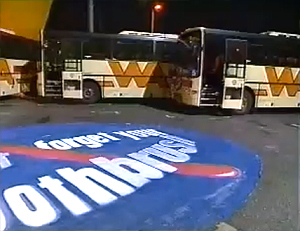 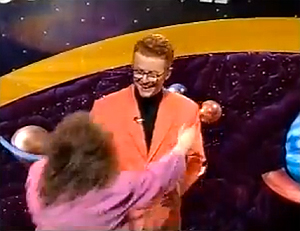 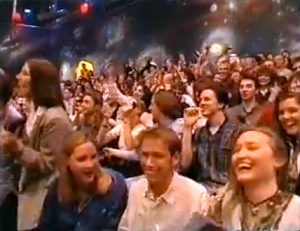 For much of this countdown we’ve reflected on television’s past, but occasionally we can alight on a moment which, as well as having the thrill of something rarely seen, can be looked at as something which studio entertainment shows have tried to recapture over the following two decades. The show is Don’t Forget Your Toothbrush, Chris Evans’ first project after hitting the big time with the Big Breakfast. It seems largely forgotten today with the genre-defining daily show remembered for its innovation, and TFI Friday recalled for its controversy. However, we can watch an edition of Toothbrush and see all of today’s Saturday night big-audience LE spectaculars. In particular the show had a marvellous relationship with its audience, mainly because of the format – contestants selected from the audience play for a holiday which they must embark on straight after the live broadcast. Thus the crowd were more excited and louder than anything seen since The Price Is Right (producer of both, one WG Stewart). In this edition, Evans spends the first half building up a special surprise for the audience. Our moment is the revelation of the twist. This week, not only will the contestants be playing for their tropical holiday, but if they win, they win a holiday for the entire audience! As you’d expect, the audience go wild, except… they don’t seem to quite believe it. It’s only when Evans confirms that five coaches are waiting outside the studios and the scene cuts to a shot of them (importantly with a kind of DFYT rug in front of them to prove it’s real), telling us that they will soon be bound for EuroDisney, that the audience breaks into a real, genuine excitement, and the place turns into pandemonium for a few seconds. One woman leaps from the audience and kisses Evans. It’s an incredible moment where the euphoria of the audience leaps off the screen and the show sounds like no TV show has ever sounded. Evans zips through a potted list of all the amazing activities in store for them and the delight never wanes. The final game itself proves to be as hectic as you could imagine, though perhaps an anti-climax as it’s clear there was no way they weren’t going to send the audience on the holiday having gone to all that trouble. While the show took a lot of cues from the more widely- recalled Saturday night Party in a House with Noel, both stylistically and in format we can see its influence today in any Saturday night big studio bonanza. Crazy games, stunts, whip pans and technocrane swoops over the hyped-up audience. But the stunts are never as crazy as this moment, and no show has ever topped this for sheer excitement transmitted from a television studio.