Brucie gets the network together, 7th October 1978 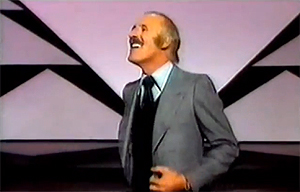 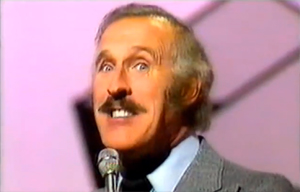 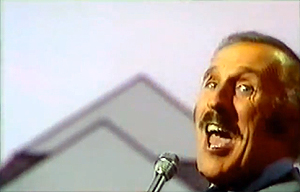 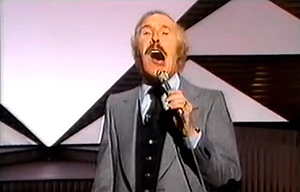 In the history of ITV, four words strike terror through the heart – Bruce Forsyth’s Big Night. This much-hyped show, apparently costing a thousand pounds a minute, was one of the biggest disasters in the history of the light channel, being thrashed week in week out by Brucie’s old show on the Beeb and being humiliatingly shunted back to teatime. But it all started so well! It’s true that ITV was a bit of a grab-bag on Saturday nights in the late seventies, with most regions going their own way and string together quizzes and imports, but the arrival of Brucie was part of a concerted effort to improve their fortunes, which was particularly important for LWT who only had three nights to grab an audience anyway, alongside their abortive attempt at grabbing exclusive rights to the Football League. Seemingly this was considered such big news that Brucie felt it important to emphasise the new programme was being broadcast nationwide – and celebrated that via song! Though to be honest, it seems less a song, more minutes of a meeting set to music, as this bizarre ditty extols the virtues of getting the network together, with a reminder, yes, that ITV is “the channel you get for free”, all accompanied by some primitive dance moves (not sure what the crotch grab during the “get for free” line is). It’s hugely entertaining, though perhaps more so from a modern day perspective as the whole idea of writing a song about the ITV network is so amusing. We love the way he even talks about the concept as if it’s so incredible (“Are you receiving us in Grampian?”). Yet at the time you could say this was where it all started to go wrong for the Big Night, as you can imagine viewers tuning in expecting some patented Gen Game-style banter only for Brucie to start singing. Even Brucie, still quick to defend its ratings, adm its the Big Night simply wasn’t enough of a format, just a rather self-indulgent excuse for him to show off, and though viewers clearly liked him, they needed a reason to tune in other than just the fact he was there, and the whole thing fizzled out. But this song remains a truly spectacular bit of television, and we will not hear the likes of it again. Perhaps wisely.