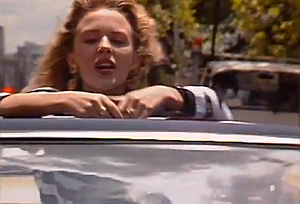 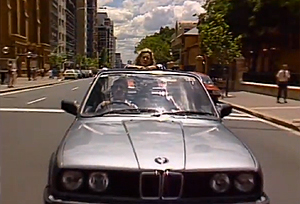 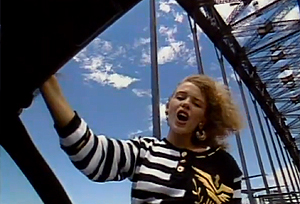 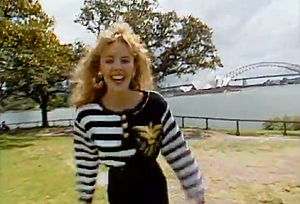 We know YouTube commenters aren’t always that clued up but it’s surprising how many people under this video have never seen this before, whereas for British viewers it’ll be very familiar and was shown so often at the time we recall people getting a bit fed up they weren’t showing the “proper” one. It’s the alternative video for I Should Be So Lucky, of course, aka the one where she’s in the car. We’re pretty sure that this clip, filmed in Sydney, was initially produced for Christmas Morning With Noel, his festive extravaganza, which that year was being simulcast on Australian television, with this being something of a cross-cultural exchange. Then Noel’s producer Michael Hurll took it with him to Top of the Pops and showed it a few times so he didn’t have to screen the official video, ie the one where she’s in the bath, every week. It’s perhaps hard to explain to anyone under the age of 25 just what a big deal this was at the time, Kylie was undoubtedly the most famous person to the nation’s pre-teens at the start of 1988 and they all rushed out and bought the record as soon as it came out. This video – as enthusiastically endorsed by Chris Lowe in Pet Shop Boys, Annually – looks a bit low-rent these days, what with her ugly, ugly driver and the brilliantly stilted waving of her “friends” but at the time Australia seemed impossibly exciting, Kylie seemed dead glamorous, even the idea of a convertible was mind-boggling enough for most kids and the nation’s ten year old girls all wanted to invite her round for tea. It also harks back to the last knockings of the days when pop music wasn’t so heavily marketed and much of the presentation was up to a director just having a good idea on the spur of the moment. As for the song itself, it’s now so familiar it may as well stand in for the national anthem. So m aybe it’s not a “great” TV moment by itself, but for what it meant at the time, it deserves its place in this countdown.