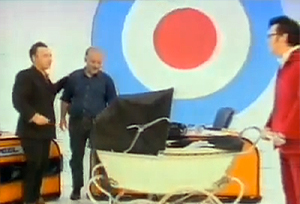 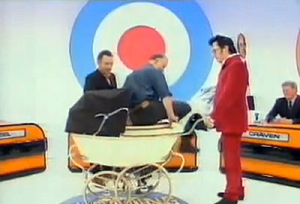 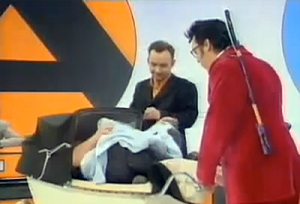 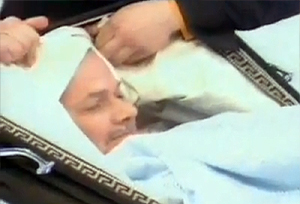 This actually isn’t the best moment of Shooting Stars, but that’s from outside the Cream era (“Peanuts!”), so instead we’ll alight on this fantastic piece of whimsy for the original series, which to our mind was the best of the original Lamarr-featuring run as Reeves and Mortimer just got all their mates on and could take the piss out of them relentlessly (putting things in Danny Baker’s rolls of fat an obvious example). In addition the budget for the series was about fifty pence, and putting the two aspects together you get this. For the final round, John Peel is simply invited to climb into a pram and cover as much of his body as he can with a blanket – and it’s just the funniest thing. For a start it’s the tattiest pram you’ve ever seen, and we love how John’s deadpan demeanour is contrasted by his enthusiastic launching into the pram. Also, despite the fact it’s the lowest concept for a game show in the history of television – get in a pram – it’s actually more exciting than most primetime affairs. But the real hilarity comes at the end where Vic, Bob and Bob Hoskins (until he, er, goes away) reveal the result and the sight of Peel’s head poking out from under the hood is a never to be forgotten image, and makes Mark Lamarr cry with laughter in the background. As well as receiving the princely sum of £62, John Peel would later say that this appearance attracted more attention than anything he’d ever done on television and radio before, and assumed that his epitaph would now read “He climbed into a pram”.