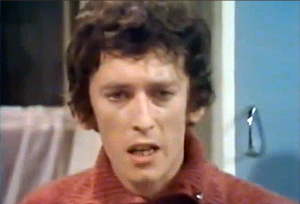 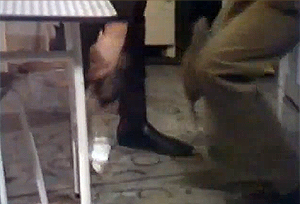 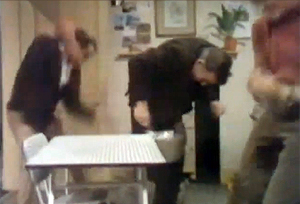 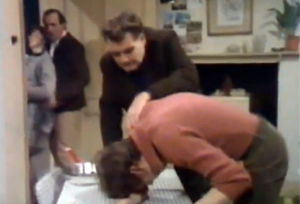 Like Big Breadwinner Hog, which we featured earlier in this countdown, here’s an example of one short scene overshadowing everything else in the series put together. Doomwatch was a hugely popular and imaginative drama series, actually created by a scientist in Dr Kit Pedlar, with Gerry Davis, which was years ahead of its time in discussing environmental issues. Pedlar himself suggested that, rather than “sci-fi”, it was “sci-fact” with many of the stories being thought-provoking explorations of topical scientific subjects – yet it managed to do this while also being a big mainstream hit (apart from the final series, which Pedlar and Davis didn’t have anything to do with and thought was rubbish). Yet, despite its obvious high quality, ask anyone the most memorable moment from it and they’ll also certainly suggest “the bit with the rats”. And rightly s o, because this is a brilliantly bonkers bit of telly. It’s fair to say the prop rats in this scene looking utterly unconvincing, though in their defence, they were working on very small budgets and most viewers in 1970 were still watching on 405 line black and white sets so it was a bit of a waste of money making them look brilliant if hardly anyone could see them properly. But it’s the frantic nature of this scene that really makes it, with the frying pan coming out, then someone rushing in with a broom, and the piece de resistance being Robert Powell repeatedly smacking one of them onto the kitchen table for a ridiculous amount of time, while a woman faints in the background. Yet however silly it looks – and even the biggest Doomwatch fans would agree it looks very silly – it kind of works in a dramatic context because in real life, if you encountered something like this, you wouldn’t act coolly and in a measured fashion, you’d panic, grab the first thin g you can find and thrash about wildly, as is the case here, while the fact they’re all falling over each other in a claustrophobic kitchen set also increases the tension. No subtlety required, or indeed provided. You certainly can’t forget it. When creating a drama, you can come up with all the clever dialogue and pretty production design you like, but sometimes there’s a situation where you just need someone to frantically whack a rat against a kitchen table. Job done!