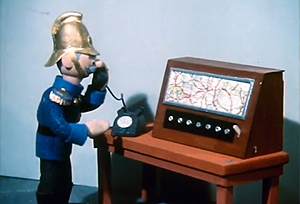 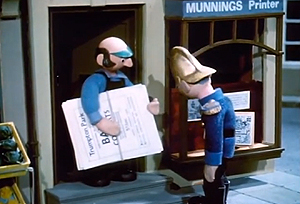 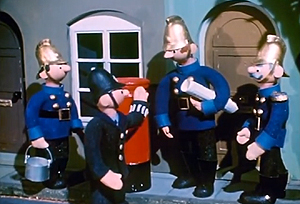 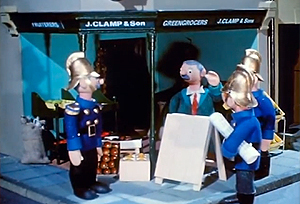 Just sneaking into the Cream Era by the skin of its teeth, this, but worth featuring. Though TV Cream is as fond of shouting ‘Pugh, Pugh, Barney McGrew, Cuthbert, Dibble, Grubb!’ and pretending to be rotating backwards into the music box as everyone else is, it’s the bits in Gordon Murray’s shows that don’t follow the formula that stand out for us. just as the first Camberwick Green has that weird never-to- be-repeated ritualistic Wicker Man-evoking ‘Post Office Dance’ interlude, so the first Trumpton has its own hallucinogenic deviation in the form of a silent comedy-esque interlude in which the firemen, goaded by legit bill poster Nick Fisher, attempt to stick up their own ads promoting the band concerts, only to be repeatedly slapped down by the authorities. After attempts to affix adhesive to Mr Clamp’s shop board and t he side of a postbox are thwarted, they decide to stick some to the side of the Fire Station, and launch into a routine of Nick Fisher- amusing Keystone Kops-riffing silliness as they haplessly try to paste their papers, ending up with Cuthbert accidentally tumbling face-first back down a ladder. And we haven’t even mentioned that episode where you can see a rabbit in the park.