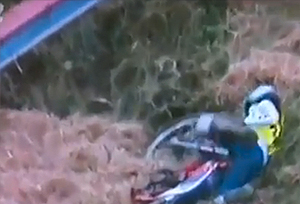 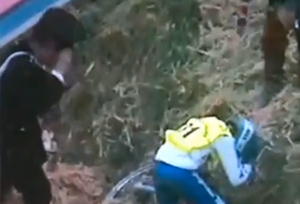 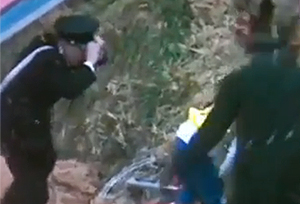 This clip we’re linking to is of atrocious quality but it’s the fullest version we can find so you’ll have to live with it. We’ve all seen this before in any case, but it remains great fun. Kick Start is a great example of the kind of made-for-TV psuedo-sport you don’t see these days, we think only The World’s Strongest Man exists now whereas in the past the likes of BMX Beat and Paddles Up were all fixtures of the holiday schedules. Junior Kick Start was the favourite, though, even for the unsportiest child, with its daft theme tune and gimmicky courses which you could attempt to replicate in your back garden with your bike later on, and the fact kids could take part – in fact to the extent most people have forgotten it was actually the spin-off from an adult show in the first place. Avuncular Peter Purves also helped jolly things along with his encour aging though critical commentary and never was that better illustrated than in this moment where Mark Schofield – who was only ten, bless him – fell off a solid-looking obstacle and, on attempting to rescue him, the St John Ambulance man and the stewards both promptly fell into the pit as well, much to everyone’s amusement. Pete tries to keep it all together and by and large manages it, remembering that a ten year old has just fallen off a motorbike, but the sight of half a dozen rather elderly gentlemen gingerly trying to negotiate a mud-splattered course with a complete lack of dignity is just the funniest thing. Happily, although he has to retire from the competition, Schofield was unhurt in his exploits and, as Pete points out, “it’s the ambulance men who need the treatment!”