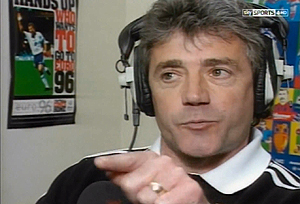 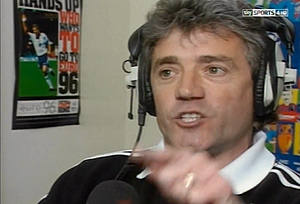 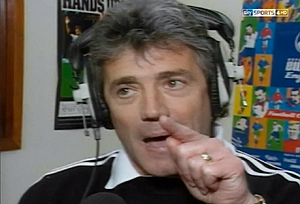 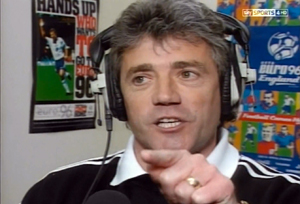 Possibly the only moment from satellite television in this list, this has been anthologised to death in recent years but it remains a startling bit of television. It’s a shame that the generally bland and unchallenging nature of most statements by managers mean that anything when anyone shows any sign of dissent or deviation from the accepted norm is classed as a “rant” even when they’re speaking perfectly clearly and politely. But the largely rambling nature of Keegan’s monologue, delivered at great volume and with relentless pointing at nothing in particular, was as near as you can get to a football manager showing genuine anger and frustration in public. Even though the Premier League still seems a new thing, this footage does seem bizarre compared to today’s slick Premier League experience, with the backdrop not being the familiar wall of logo s but two tatty posters, while the Sky team are behind an enormous desk (with Gray’s telestrators looking like VHS video recorders, which they probably were) in nasty suits and joined by that noted grand inquisitor Barry Venison. For those unaware of the football background, Keegan was manager of Newcastle United at the time, going head to head for the title with Manchester United and Alex Ferguson had suggested that Leeds – who Newcastle had just played before this interview and had faced Manchester United the previous week – would try harder against Manchester United than in any game. Clearly Keegan had been stewing on this for days as he blurted out his disgust at the apparent disrespect of that comment, swatting away Gray’s attempt to jolly it up a bit and poo-pooing Richard Keys’ suggestion it was “part of the psychological battle” by immediately shouting “no” and then seemingly agreeing with it anyway. OK, so it’s since been dredged up a million times and given a significance it probably doesn’t deserve in terms of the effect of it – with Newcastle having thrown it away before this moment – but to see a man lose all dignity on television and just explode in anger remains compelling.