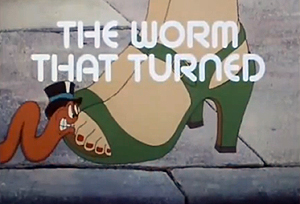 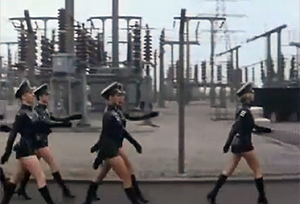 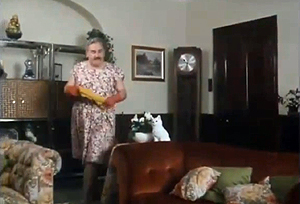 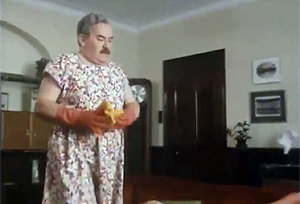 We’ve remarked before on the incredible variety and production values of The Two Ronnies and they were never better illustrated than in their filmed serials, where they were making in essence a complete feature-length comedy film every year. The most celebrated is probably The Phantom Raspberry Blower of Old London Town, but we’re highlighting The Worm That Turned because it was perhaps the most memorable – helped by several repeats in the 20/21/22 Years Of The Two Ronnies compilations through most of the eighties – and even now it remains quite a striking piece of television. OK, so basically it’s an excuse to make a load of sexist jokes about men and women changing places (though the Larry Grayson joke is quite subtle, we suppose) and much of the humour comes from the fact Ronnie B looks funny in a frock, but it’s executed incredibly well and, with eight ten-minute episodes to play with, they can actually tell a proper story and create a (slightly) realistic three dimensional setting. What really makes it stand out for us, though, is the way it looks and sounds. Being completely shot on film it has that extra sheen, the animated opening titles are hugely memorable and, best of all we think, there’s the incidental music which is really quite unsettling and fits in perfectly with the skee-wiff setting. Despite a totally daft premise, there is something quite melancholy and creepy about the whole thing, enough to unsettle us a bit where we were young. It’s arguable whether it’s realised so effectively that it justifies the marathon running time, flagging quite badly at points as the jokes get exhausted, but it looks and sounds so unusual and the concept is so well-executed that it’s certainly a laudable attempt at doing something totally out of the ordinary.