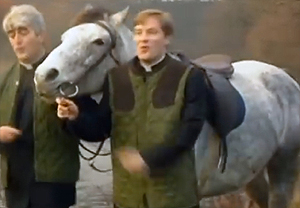 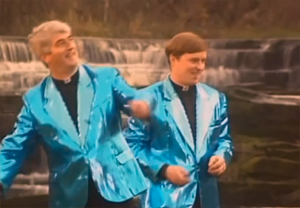 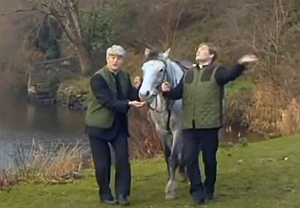 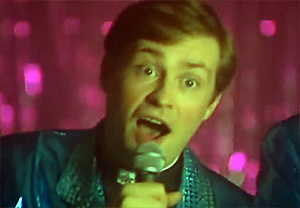 Apparently when Graham Linehan and Arthur Mathews wrote this episode, when it came to working about what the song would be about, Mathews did actually say, “What about… a lovely horse?”. Two hours later, when they’d finally stopped laughing, they went and wrote exactly that. The Song For Europe episode of Father Ted is absolutely stuffed with brilliant moments, including their first pathetic attempts at performing (“Wait, I can get this note!”), Ted’s intense songwriting session (“Just play the BLEEP-ing note!”) and Jack’s instant review, but the one bit that everyone remembers, rightly, is the obligatory video. The funniest bit in the entire thing is without doubt that sax solo, with the utterly terrifying horse’s head, the most unsettling picture imaginable accompanied by bizarre visual effects, which once seen is never forgotten. Loads of other great stuff in it, too, though, including the stuff in the swimming pool, Ted’s train actions and, especially, Dougal’s face while he’s playing badminton. Linehan and Mathews have said the whole thing is just a rip-off of the kind of stuff you’d see on Irish telly all the time, which makes it all the better. Of course, this whole sequence is just relentlessly stupid and emphasises that Father Ted is a sitcom that has absolutely no grounding in reality whatsoever and exists purely to make people laugh. Which it did, over and over again.