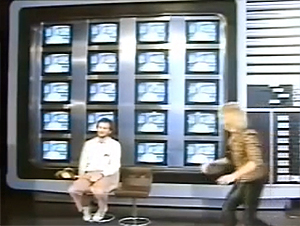 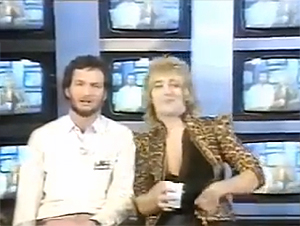 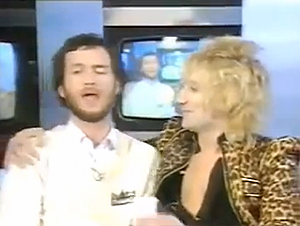 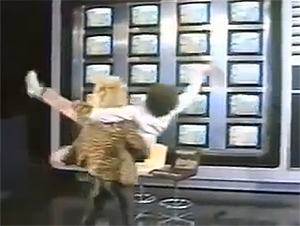 There’s a famous moment from Kenny Everett’s show involving Rod Stewart, but great though that is, with his corpsing backing band and stupid dancing, we’ve got a real soft spot for this fabulous moment starring the real Rod from Cuddly Ken’s days on ITV. Earlier in the seventies Ken had not particularly enjoyed an abortive spell as a TV star with LWT when they assumed he could be as spontaneously funny in front of the camera as he was on the wireless, only to find inspiration was hard to come by. On Thames, though, all that was different, helped by the hugely informal nature of the programmes, emphasised by the only laughter coming from the studio crew and endless fourth wall breaking, with out-takes being left in if they turned out to be funnier than the actual sketch they were planning. I f anything sums up the Video Show’s greatness it’s this hilarious bit of telly. First of all, marvel of the expense lavished on this sequence – two chairs nicked from an office, a freebie Thames T-shirt and a cup of tea from the canteen. Ken had the absolute respect of all the guests on his show and so the obligation to engage the host in a bit of banter was rather more appealing than on most light entertainment shows, so Rod doesn’t hesitate to join in. Hence, after Ken’s extremely silly introduction and visual gag, Rod is relaxed enough to throw the tea in Ken’s face, leading to a brilliant reaction and uproarious laughter from the crew, before any pretence at professionalism comes crashing down with the pair of them dragging each other off set. What comes across is two mates having a bit of a laugh in front of the cameras and it doesn’t seem at all self-indulgent – and in 1979 this kind of spontaneity would have been completely new to virtually everyone. Course, the move to the Beeb would bring with it much bigger budgets but Ken, somewhat uniquely, was always at his best on the light channel and if you can make some pissed-off technicians laugh, you can do anything.