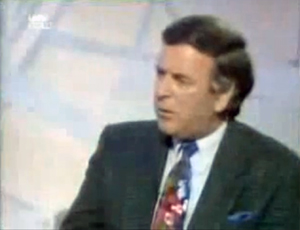 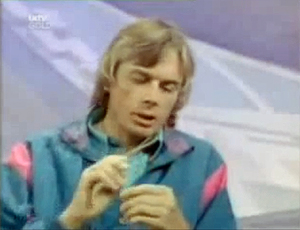 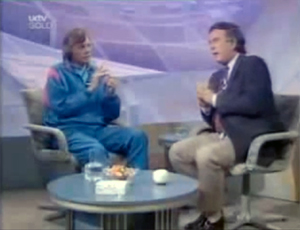 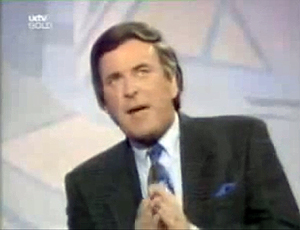 Does this qualify as a “great” TV moment, then, given that Wogan has later said he regretted it because he thought Icke might have been taken advantage of in a vulnerable state? Well, we’re suggesting it is if only because it remains one of the most jaw-dropping pieces of telly ever, where someone who you’re used to seeing on your screens in a straight-laced fashion suddenly undergoes the most spectacular of transformations, up there with the news of Frank Bough’s extra-curricular activities as coming completely out of left-field. Certainly there was no sign of that happening over the previous decade when Icke was competently presenting snooker from the Crucible or the sport on the news, or indeed during his stint on Saturday SuperStore, though apparently he was rather aloof backstage and wound up some of his colleagues. Later in the eighties he became i nvolved with the Green Party before disappearing from our screens, apparently due to the Beeb’s cold feet over his political activity. Turning up on Wogan in a turquoise shell suit, though, he took virtually everyone by surprise, the stupefied audience seemingly laughing simply out of bemusement more than anything. Tel’s confirmation that “they’re not laughing with you, they’re laughing at you” is probably one of the most famous moments from the entire ten-year history of Tel’s chat shows, and out of context seems somewhat abrupt, though it’s obvious seeing it that he’s saying it with the utmost concern for Icke’s well-being, and it’s a testament to his skills that Tel does treat him with respect and doesn’t just try and show him up or expose him as a fraud. You could argue that the programme should never have invited him on, but Icke himself, as he discusses in that 2006 interview from Now and Then, went on of his own free will and it launched him into a n ew career which has brought him notoriety, influence and presumably, some lucrative engagements. However unedifying a spectacle it may be, though, it was undoubtedly one of the most bizarre pieces of television ever. Imagine Ray Stubbs doing this!