Graham Taylor appears not to like it, 27th January 1994 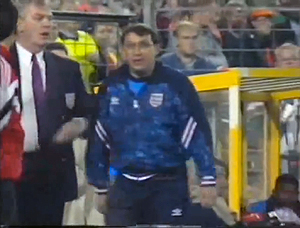 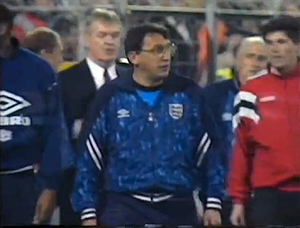 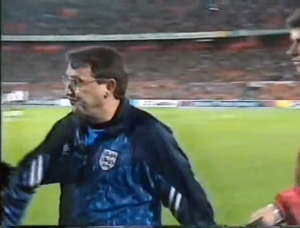 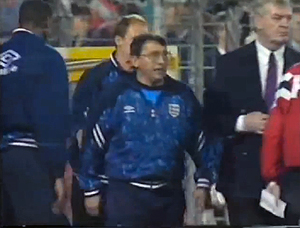 The most amazing thing about An Impossible Job is that the FA even allowed it to go ahead, although at the time the FA was a pretty shambolic organisation that only employed one PR person who was expected to cover all their operations from the England team to Sunday league. The intention of the producers was that this would be one of a series following people doing high-pressured or horrible jobs, though it’s hard to imagine any further episodes would find any job more horrible. There are football fans that can recite the whole programme off by heart, including Taylor’s altercation with the hack Rob Shepherd and his joking with Will Hanrahan behind the scenes at Anne and Nick, but it’s the unbelievably grim section on the crucial Holland vs England match that sticks in the mind. Wisely shown without any narration, we get a real sense of the sheer pointlessness that Taylor felt sat on the bench, reduced to aimless shouting and complaints at the linesman. The complaints are, of course, utterly hilarious with Taylor’s unique turns of phrase, following the first rule of speaking to foreigners – ie, talk very slowly and loudly. Also watch out in this sequence for a great bit of commentary from Brian Moore who knows exactly what Ronald Koeman’s going to do before he does it (“He’s gonna flick one, he’s gonna flick one!”) which is a level of foresight none of the team or management appear to have. It’s not just Taylor who’s the star, though, with his two sidekicks also proving highly watchable. The perennially pissed-off Lawrie McMenemeny is the classic old school football coach but the real star is of course Phil Neal who, despite his highly distinguished playing career, appears to do absolutely nothing other than repeat everything Taylor says. Indeed it was Neal’s reputation that seemed to take the biggest knock from the programme, Taylor, having resigned before the show went out, actually seeming to get a bit of kudos for his ranting and raving at least illustrating he cared about the job. Apparently he couldn’t believe how much he swore.