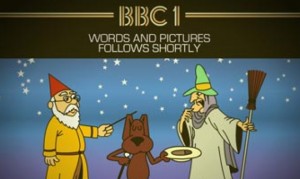 BASIC ALPHABET and sentence tuition, featuring floating spongelike cartoon CHARLIE, and scary stop-motion stories with the words lighting up on the screen as they were spoken. Set in a public library; the “We’ve got a new book in” introduction set up the theme of the show. Funny how this herd of unsupervised kids just turned up out of nowhere, though. HENRY WOOLF was nominally in charge, later replaced by VICKI IRELAND. Stuck in our minds are animations like Lazy Lion, Cool Cat (who played a double bass with such gusto that in true cartoon style he drove the spike through the ground which gave way below him, causing him to fall down the “Acme Bottomless pit type 1 UK issue”) and various other alliterative animals. The format was always the same – a basic loop of the animal in question, with that jazzy, laid back tune, pause – “Cool! Cat!”, ba-dum, bum, bom – and round it went again. And again. Plus the magic pencil, displaying in great detail how to write a particular letter: “Top to bottom, over…and down”. Those scary model ones (the central ‘story’ of each show) included various folktales; the butcher and his wife whose every wish comes true – ‘I wish your nose was a sausage!’ – cue rather alarming visual representation of same; the Jack O’Lantern pumpkin that came alive and hobbled to people’s doorsteps on a staff-and-boot combo; that one about a mouse/man thing who walked for hundreds of miles and met various ‘travelling tinkers’ (their expression) who offered him a new pair of shoes, a new pair of socks, and, hideously, a NEW PAIR OF FEET (he just unscrewed the old ones); and the infamous Frog and Toad animations, which we think also turned up on Play School from time to time. They were scary, though – it was the way the eyes rolled around and the long pauses between sentences. The kids meanwhile got on with making things and doing stuff, all under the watchful eye of Charlie, although he inevitably got a bit carried away with whatever activity they were doing and ending up covered in paint/glue etc – cue presenter and kids en masse: “Chaaaaarlie!” And it was always Halloween – much apple-bobbing, and so on: “We’re witches of Halloween, wooo-oo/Our faces are yellow and green, wooo-ooo.” Words and Pictures also turned up in, of all places, [cref 3512 THREADS], educating post-bomb survivors in basic literacy. A chilling thought, in more ways than one.