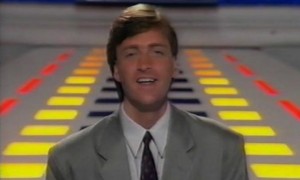 RICHARD MADELEY would often double your agony on precious days off school by appearing twice. At least on THIS MORNING you knew Richard would say something embarrassing or that Judy would get the shakes. Here our man simply smarmed his way through this bog-standard Granada-only (for a while) gameshow with spurious holiday theme. Odd bits included the introduction of the contestants with a little graphic of their passport and personal details listed (age was concealed, for it was one of the rounds, “guess your opponent’s age”, leading to usual Madeleyisms – “Thirty-three? You’re older than thirty-three, aren’t you? Well you look it…”) and the biggest ever rotating structure on a TV show – contestants and host perched on giant turntable, which turned at regular intervals for apparently no reason whatsoever, complete with overhead shot. Final was usual “illuminate lights on titular runway by answering questions” schtick.