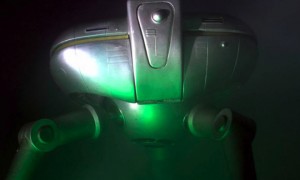 AS DEREK Griffiths sang in LOOK AND READ’s The Boy From Space, “space goes on… forever.” And so did this epic UK/US/Australian co-production. In a regressed medieval futurescape of 2089, docile yokels are under the control of Wellesian Tripods – three-legged towering robots who implant mind-supressing chips under the scalp via a long, tendrill-y thing (“capping”). Inevitably, a rag-tag band of dissenters break free to find out what was going on, eventually coming face-to-face with one-eyed, three-legged fleshy “Masters”, who could be disappointingly easily done in with a punch in the eye. Video effects were good for the time, including smart enough matte paintings of a destroyed Paris, and the Tripods themselves, although it was often pointed out that the only direction a three-legged thing could move in would be around in a constant circle. Where it all went wrong was with the plots: tedious, incomprehensible if you tuned in mid-series, short on humour and long on dreadful moralising: not what you want on a Saturday night. As a result it got cancelled two thirds of the way through the planned three-series run. Oops. Chief derring-doers were cousins Will (JOHN SHACKLEY) and Henry Parker (JIM BAKER). Stereotyped French oik Beanpole (CERI SEEL) joined them on their quest to reach the White Mountains of Switerzerland where, ahem, the Free Men lived. Henry got replaced in series two by Fritz (ROBIN HAYTER) for no apparent reason.