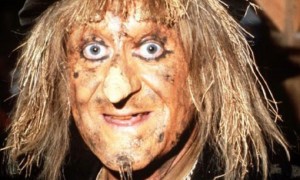 JON P’TWEE was your thick-but-loveable scarecrow befriended by kids, according to the 7″ single (see below), “just like John and Sue”, with all the “thinking head”/”cup of tea and slice of cake” stuff. (Sue was, in fact, a pre-pubescent CHARLOTTE “FOUR/MARMALADE/ORANGES” COLEMAN.) Aunt Sally (UNA STUBBS) and “The playing-God-with-bits-of-turnip-and-carrot-alchemist Crowman” (GEOFFREY “CATWEAZLE” BAYLDON) did the schtick, along with multiple guest appearances down the years by BARBARA WINDSOR as Saucy Nancy. Original Southern television production later shifted lock, stock to New Zealand (for co-production of the “…DOWN UNDER”), though the series had long since deviated from the original BARBARA EUPHAN-TODD books.