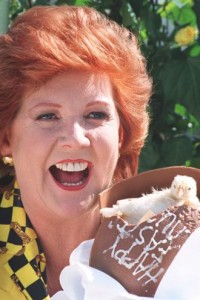 DEVISED BY JEREMY BEADLE as a new vehicle for himself, the bearded one pitched the concept to LWT who sat on it until he went on holiday and then secretly made a pilot with CILLA “HAT” BLACK, back in the big time following years of sprogging after putting in a memorable turn on WOGAN. Originally she was paired with CHRISTOPHER “SO GOODIE” BIGGINS and it was broadcast live, leading to Cilla bantering with JIM “NOSFERATU” ROSENTHAL one week about the following England vs Brazil match, which they didn’t bother editing out when it was repeated on Granada Plus fifteen years later. Imperial phase Surprise didn’t begin until the following year, when Biggins had been replaced by BOB “SOUTHBOUND” CAROLGEES. Later, a beauty contest of guest hosts linked the Searchline spot until viewers voted that GORDON “KRYPTON” BURNS had just the required gravitas to sit on a high stool and show sepia photos of old RAF troops. By this point it was top Friday or Sunday night big fuck-off LWT entertainment, stuffed with daft features like the Cillagram where, just to remind you who she was, Cilla would press-gang an unsuspecting punter in joining her in a relevant song (ie, Cilla turns up at a 64th birthday party to trill “Will you still need me…?”, that sort of thing). Massive child interest centred around the absurd telephones that Cilla would use to ring up the following week’s victims, a decade before Graham Norton. The final item would be a huge reunion between two people with hundreds of years and miles separating them, before Cilla would bellow either “The unexpected hits you between the eyeeeeeeeeeeees” or, later, “And the nicest surprise of all is youuuuuuuuuuuuuuuuu”, with an instrumental break where she reminded us of how many tears had been generated in the past hour. Meddling in the nineties saw Bob and Gordon leave, and hence terminal decline, and when David Liddiment took over ITV he spent weeks denying he was going to axe it. Then he axed it.