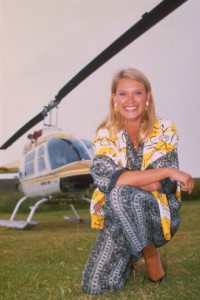 “HAS ANYONE seen a clue, a pink clue?! It’s on a piece of pink card! Hello, have you seen it?!” Seminal parlour-game-meets-orienteering ordeal that helped Channel 4 stay in business and made household names of ANNEKA RICE, her cameraman Graham, her helicopter pilot Keith and WINCEY WILLIS who pasted up blue arrows and looked gnomish back in the studio. KENNETH KENDALL helmed proceedings in the least-excitable manner possible (“Hello”) from a replica drawing room with a log fire and a million bookshelves. Two contestants (middle class couples or mother/son pairs, drabbily dressed, earnestly spoken) rummaged through ancient tourist guides and encyclopedias to solve five “cryptic clues” that would lead Annie to some treasure, usually a Victorian thimble or Jacobean trouser press or something similarly underwhelming. The course would take in numerous sights within a particular region, usually popular attractions, resulting in ubiquitous “get out the way” moments as Annie battled through camera-hungry punters. “Watch out for the helicoper blades – stay back!” Clues often involved demeaning tasks like jumping into the sea, riding a frisky horse or interrupting a live performance of some kind (replete with the inevitable celebrity cameo – “why, it’s BRIAN BLESSED isn’t it?”) and always always required lots and lots of running and shouting. Pioneered lightweight camera technology and satellite gubbins. Whole thing would be filmed “as live” in 45 minutes with the occasional ad-break forced pause to get Annie back to the helicopter which had landed in the middle of a village fete presciently organised by the local parish council to cash in on maximum TV coverage. After one too many humiliations, culminating in being slapped in the face by a beer-soaked rag, Anneka quit to be replaced for one series by the lamentable ANNABEL CROFT.